Mayumi Sako
Yukiko Hoffman (ホフマン 由紀子 Hofuman Yukiko) is a supporting character in The Evil Within 2. She is a trained psychologist and medic who was responsible for interviewing both potential candidates to work for MOBIUS and test subjects for entry into Union.

Hoffman is of Japanese descent, her missing persons poster claims she is in her early thirties. She has long dark hair and brown eyes.

She wears a variant of the standard MOBIUS uniform specifically designed for medical units, with less armor padding overall and more pouches and pads to store her equipment. She also wears a stethoscope around her neck, though she never seems to make use of it. Unlike her fellow operatives, she wears a short-sleeved shirt and no gloves.

Yukiko Hoffman appears to be very serious, calm, and analytical. Esmeralda Torres states she's a good person, but tends to come across as slightly aloof or cold, joking that Hoffman often stares at people like she's studying something from a petri dish.

Being a psychologist by trade, she has a calming presence and is capable of deducing whether someone is lying or not with great accuracy, though there are certain individuals who could fool even her.

It is later revealed during Sebastian's first confrontation with a Harbinger and after speaking with Torres, that she cares deeply for the people in Team Alpha and all the victims she helped force into MOBIUS's twisted experiments. She deeply regrets her blind loyalty and tries to make up for what she has done, resulting in her death.

Prior to the events of the sequel, Yukiko Hoffman worked as a field medic and company psychologist who was responsible for interviewing new applicants, like Myra Hanson and Esmeralda Torres. She studied the Beacon Mental Hospital incident extensively and was able to gain valuable insights into the nature of the mastermind behind it, deducing that Ruvik appeared to have psychopathic traits, while comparing him to Stefano Valentini who is a true "high-functioning psychopath".

With knowledge from the past incident, she was heavily involved in the experiments and tests that turned Lily into the Core, and also screened the potential candidates to plug into Union. A test that Stefano Valentini, a "high-functioning" psychopath, easily bypasses by appearing to be sane, as he was aware of his own condition.

Yukiko Hoffman was part of Team Alpha tasked with entering the STEM in order to locate it's missing core, Lily Castellanos. She became separated from her team and was trapped there when Union began to collapse.

Sebastian Castellanos meets Hoffman while searching for Exit D5 through the Marrow, at the business end of a pistol. At first, she did not believe he was really the Sebastian Castellanos, believing him to be dead, but Sebastian convinced her he was alive. Using her skills as a psychologist, Hoffman was quickly able to determine that Sebastian is not a threat and lowers her weapon, and subsequently offers him shelter in her Safe House.

Some time after Sebastian leaves for Union’s business district, Hoffman is contacted by fellow Alpha Team member Liam O'Neal, who tells her to meet up with him in a restricted area of the Marrow where Mobius scientists have been studying and conducting tests on the Lost. Though she manages to meet up with O'Neal, she is horrified to discover that he has been transformed into a Harbinger. Sebastian catches up with them shortly thereafter, and finds Hoffman trying to talk some sense into O'Neal but to no avail. While she initially attempts to stop Sebastian from shooting as O'Neal, the latter traps her in the next room and reveals his identity to Sebastian, who is eventually able to defeat him.

In order to make up for her mistakes, she insists on accompanying Sebastian to Theodore Wallace's stronghold, by keeping an experimental portable Stable Field Emitter functioning to protect him from the flames surrounding the compound.

She is killed at the entrance to Theodore's stronghold when one of his Disciples tackled her, causing her to drop the stabilizer which breaks on impact, though Sebastian manages to make it safely to the entrance before realizing what happened. He tries to save Yukiko, but the force field collapses before he could, dooming her to a fiery demise.

Her last words were pleading with Sebastian to leave her and find Lily as fast as he could so they could escape together. Believing that if Sebastian were to do so, it would help make up for what she has done to him and to other victims of MOBIUS and STEM. 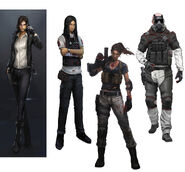 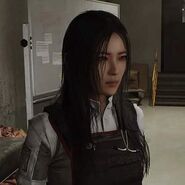 Yukiko cries out to Sebastian as she is incapacitated by a Disciple
Community content is available under CC-BY-SA unless otherwise noted.
Advertisement