The Evil Within Wiki
Register
Don't have an account?
Sign In
Advertisement
in: Characters, Male characters, Deceased,
and 2 more

Liam O'Brien
Valerio Jimenez is a minor character in The Evil Within. He is the brother of Marcelo Jimenez and was Leslie Withers' original doctor.

Valerio is encountered in Chapter 4 as one of the Haunted. After Sebastian and Marcelo escape the Sadist in Elk River, they pass under a large wooden gate and into a deeper part of the village, which Jimenez informs Sebastian to be called "the Hospice". The doctor tells Sebastian that his brother lives there and can provide them with shelter.

The two seek out his Hospice and hear a sinister voice coming from inside. Sebastian enters cautiously, and they find the doctor hunched over a slab in a back room, talking to himself. Sebastian advises Marcelo not to approach the seemingly working Valerio, to which he ignores and walks in anyways, introducing the two. Marcelo stops suddenly as he notices Valerio is not himself. Chunks of viscera fall to the floor as Valerio looks over his shoulder from the body he had been eviscerating and hisses at the two, raising his large scalpel. Sebastian frantically puts down the abberant doctor in self-defense, Marcelo in utter disbelief.

Afterwards, Sebastian experiences another STEM headache and a flashback of Valerio's transformation into a Haunted appears; Valerio is seen screaming maniacally about an 'itch' located on his left temple, which he madly scratches open in desperation. Valerio is seen with red veins all over his body like other Haunted and begins mutilating a portion of his scalp as he fades away.

He appears as a tall, overweight man wearing a white button up shirt, a brown vest, brown trousers, black shoes and a red tie. He also sports wire rim glasses and a thick mustache on his upper lip. 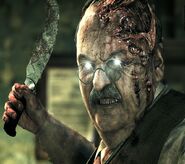 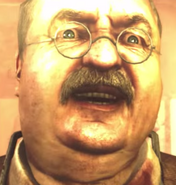