The Evil Within
The Consequence

Ch09: The Cruelest Intentions
Ch02: Crossing Paths (The Assignment)
The Trauma is an enemy encountered in The Evil Within and its downloadable content The Assignment.

The Trauma appears as a tall, naked humanoid creature with drooping flesh where a face would normally be. It stands at a severe gaunt, caused by the massive wooden beam it was painfully attached to, to which its left arm is still shackled. Its hands are messily mutilated, with whatever remains of them ending in bloody stumps attached to large instruments coming from the beam itself. The Trauma sports a clawed gauntlet attached to its right arm, which it uses to swipe at prey for considerable damage, as well as slashing or plowing the ground as it runs.

The Trauma is a manifestation of the resentment Ruvik held for his father's religion that was forced upon him, and his subsequent concept of death and rebirth, potentially even a mockery of it. This is possibly symbolized by how it is burdened by the wooden beam on its back.

Traumas usually wander aimlessly throughout the rooms they appear in, and will occasionally stand in one place to "look" around with what remains of their head. Traumas can be lured with Bottles, and will get bored quickly after detecting the player if they hide.

Should one detect Sebastian, it is also capable of frightening bursts of speed as it rushes towards him, dragging its clawed hand behind it as it does so. In combat, Traumas make slow, deliberate swipes with their claws that can be telegraphed and dodged, though the environments they inhabit are usually tight, which can make evasion difficult. If Sebastian then backsteps, a Trauma may launch its beam-mounted hook at him for minor damage.

If it is damaged enough, the Trauma will angrily tear the wood plank off its back, freeing its left arm, which allows it to maneuver a bit faster, as well as being able to use the chained hook attached to the beam to snag Sebastian from great distances for an instant impaling kill. However, when it does this, it exposes a large organ growing between its shoulder blades that serves as a weak point, taking much more damage from attacks to the organ than attacks to other parts of its body. If killed while frozen, A Trauma will die without tearing the plank free.

Traumas are often encountered in pairs and will attempt to double-team the player if they corner them, so always try to single them out for an easier time. Unless the player has plenty of shotgun shells, it is not advised to fight them if avoidable, as Traumas can take a lot of damage. Explosive bolts and grenades can be very effective when they must be fought, and it is recommended to use Freeze or Shock bolts to stun and leave them open for attacks.

The player can also perform a sneak kill from behind, although Traumas will not die in one hit unless they are already low on health.

In The Assignment, Juli can only maneuver around the Trauma, as she is poorly equipped and it can kill her in a single hit. 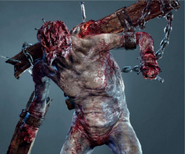 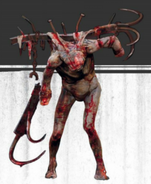