There are various types of traps throughout the game. Most are motion activated, though some can be activated with a lever. Most can be disarmed for Trap Parts that can be used to make bolts for the Crossbow.

The game is littered with traps due to Ruvik's paranoia and sadistic tendencies. Outside STEM, Ruvik would often set traps to protect his research. In STEM, the appearance of such traps manifest tenfold.

Often attached to dynamite packs, these can be tricky to notice, and will trigger the explosion instantly upon being set off, killing Sebastian instantly if he is at low health. Enemies can also be lured into them, making for an easy kill.

Often hidden throughout the ground in places where they will blend in, these will latch onto Sebastian's foot until he yanks free. They are quick to disarm upon being spotted, yeilding Trap Parts, and can also trap The Haunted, allowing for an opportunity to light them with a match. It is also worthy of note that bear traps are especially prominent on Akumu mode, set in areas where they normally wouldn't be found, such as the courtyard where the Sentinel is fought. Like any other form of attack, these will result in an instant death on this difficulty, so it is important to always be wary.

These traps are activated through levers, and are occasionally attached to tripwires. They can be operated both by Sebastian and The Haunted. Activated traps include spiked ceilings and walls, raining harpoon bolts, spiked wheels and furnace floors.

These chests contain Motion Sensor Bombs that are set off when opened carelessly. Opening them halfway will disarm them, yeilding additional parts.

These are placed on the ground by The Keeper. When stepped on, it triggers barbed wire to shoot out and ensare Sebastian. They can be shot to trap The Keeper to hold him in place as well. Throughout Prestige Hotel, many victims of these traps can be seen sprawled throughout the hallways. 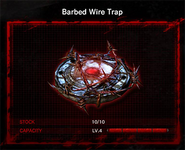 Found in the Victoriano Mansion in Chapter 9, this trap was set by Ruvik and when activated, seems to tilt the hallway, funnelling Sebastian into a giant grinder. Deactivating it requires shooting the blinking red light located at the top of the trap.

Found in Chapter 10, this is activated when the power in the merry-go-round area is switched on to prevent Sebastian's progress, slicing his head clean off with it's massive, rotating blades if he forgets to duck each time it comes around. The Haunted can also be decapitated by the blades, though masked ones will often crouch before pursuing Sebastian, but if shot at the right time they will spring up momentarily as the blades come around.

When already activated, these traps will discharge thick barriers of fire, hurting Sebastian if he tries to push through, and can only be deactivated when levers are pulled or switches are shot. This process is prolonged on harder difficulties. Such traps are present in the furnaces where Laura is fought, and can be used to set her ablaze with proper timing. These take the form of a small pipe aimed downwards, or in one area, a much wider pipe coming out from the side of the wall.

Prominent throughout Prestige Hotel, constructed by the Ruvik Doppelgangers. If Sebastian attempts to walk through them without first disarming them, sprinklers around the iron frame will rain down acid on Sebastian, searing his flesh as he writhes in a puddle of it.

Equipped with spinning buzzsaw blades and explosives, these traps travel around the floor arbitrarily. When in the proximity of Sebastian, they cause damage by hitting his feet or self-destructing. Green ones can be deactivated with a Shock Bolt, and the bombs can be shot to set them off.

By Chapter 14, Motion Sensor Bombs will have become less prominent, and Explosive Bolts identical to Sebastian's will take their place, exploding after a much shorter reaction window, though much easier to disarm. Throughout Crimson Express Subway, they become more and more prominent, sometimes even accompanied by Haunted wielding Agony Crossbows. They can be shot, however, to trigger chain reactions with any nearby bolts. Upon exploding they will also launch small spikes.

Traps set up by the nefarious Stefano Valentini. When tripped, the camera produces a time warp cube that slows everything inside it down, especially dangerous when enemies are chasing Sebastian.

Wired with Explosive Bolts, these traps will explode that can damage the player. These can be disarmed and added to the player's inventory.

During Chapter 7, Sebastian must search out and destroy two of Stefano's sculptures, traveling into painting to do so. Each time, after making his way past foes and retrieving a key, he must maneuver a segment where electrified barbed wire is placed intricately throughout the room. Using agility, Sebastian must avoid touching them, or else be electrified.

While non-lethal to Sebastian, these can be used to instantly kill Disciples (if they are hit while frozen) and freeze anything else nearby.

Mine Trap was a cut weapon from the beta of The Evil Within. They could be collected and used upon disarming them, and in turn be set throughout the environment. It is likely that they functioned similarly to Explosive Bolts, sticking to surfaces and exploding violently when an enemy walks by.