The Evil Within Wiki
Register
Don't have an account?
Sign In
Advertisement
in: Collectibles, Kidman DLCs Collectibles, Torn Letters

The two Torn Letters are collectibles found in The Assignment and The Consequence. They are notes written by Ruvik that were torn into fragments and hidden around the maps in small safes. When reassembled, they can be read and will provide more insight into his thoughts, as well as the incident in The Evil Within. 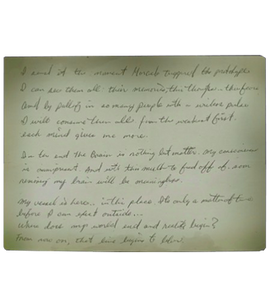 I sensed it the moment Marcelo triggered the machine.

He had removed my mind from the core. He thought he figured out how to get around me, but he is such a fool. The brain is nothing but matter. My consciousness is omnipresent.

I can see them all: their memories, their thoughts... their fears.

And by pulling in so many people I will consume them all. From the weakest first, each mind gives me more power to conquer.

Where does my world end and reality begin? From now on, that line begins to blur. 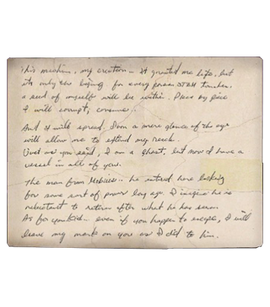 This machine, this system... I was reborn inside and I will be reborn again. For every person STEM touches, a seed of myself will be within them. Piece by piece I will corrupt you, consume you.

I envision a world where a mere glance of the eye will allow me to spread on to the next. Just as you said, I am a ghost, but now I have a vessel in all of you.

The man from Mobius... he entered here lusting for some sort of power long ago.