View source
watch 01:33
Who is Father Theodore Wallace?
Do you like this video?
Play Sound

"You hold the key to easing your torment. I can guide you to the lock."
―Theodore Wallace

Theodore Wallace, a.k.a. Father Theodore, is the primary antagonist in the second half of The Evil Within 2 and one of the most powerful denizens of Union, as well as the founder of the Mu Centers.

A former motivational speaker and spiritual leader, Theodore joined MOBIUS and was placed in charge of recruitment for Union.

Seeing the potential in STEM, Theodore plotted to use it to usurp control of MOBIUS and eventually the world. He became a part of a plot headed by Myra Hanson to covertly free Lily Castellanos from STEM, alongside fellow operatives Juli Kidman and Esmeralda Torres. He was also the one to suggest the elimination of all MOBIUS assets through their cerebral chips once the new Core is instated.

Theodore and Myra entered STEM together, but once Lily was found, Theodore revealed he had ulterior motives and wanted Lily for himself so he could take control. Myra refused to allow Theodore to use her daughter like that and told her to run. Enraged, Theodore swore to Myra that he would get Lily. It was at this point that Union went dark and began to collapse. Theodore was unable to find Lily or Myra.

Leader of His Own Cult

Theodore began to gather followers to allow him to take control of Union. Using his mental prowess, he constructed a massive fortress, and began to recruit followers using his persuasive nature to bring people to his side. One of such people was Stefano Valentini. In exchange for finding Lily, Stefano would be allowed a degree of Freedom within Union. However Stefano decided against giving Lily to Theodore upon discovering how powerful she was. Angered at this betrayal, he sought another disciple, in the form of Sebastian Castellanos. He summoned Sebastian to his stronghold after he dispatched Stefano and witnessed Myra take Lily.

He attempted to persuade Sebastian into giving Lily to him, so that he may better use her power. Much like Myra, Sebastian refused. He told Sebastian to return willingly and accept his offer before sending him away in a tidal wave of blood.

Theodore then enlisted the help of MOBIUS agent Liam O'Neal to help him hide his signal in exchange for him removing O'Neal's fear, though he also "conveniently" left out the part where he would twist and warp him into one of his twisted Harbingers. He ordered O'Neal to kill Yukiko Hoffman, as he believed she was a potential threat. Sebastian however followed her and arrived just in time to thwart this, and destroy the device that masked his signal with the help of Esmerelda Torres. Enraged, he brought Sebastian and Torres to him. Using Sebastian's guilt of being unable to save Lily, Theodore created an apparition of her to blame him for leaving her to die before setting him ablaze and tricking him into shooting a confused Torres, who despite all odds managed to get them both to safety before expiring.

When Sebastian returned to his stronghold, Theodore continued to try and persuade the former detective to help him get the power of the core, however his words were met with hostility and anger after all the deaths and suffering he had caused. Enraged at Sebastian's continued defiance, Theodore promises he will find and kill Myra making Lily watch.

When Sebastian reached his throne room, Theodore once again tried to use Lily against him. However Sebastian had let go of his guilt he felt after learning of the truth, and easily shrugged off Theodore's attempts at manipulating him. Impressed that Sebastian had conquered this guilt, he instead turned to darker memories within his mind, specifically the most harrowing creatures he'd encountered the first time he was in STEM: The Sadist, The Keeper and Laura. Tired of blaming himself for the events of Beacon, Sebastian worked up the resolve to win and defeated them all.

When setting the worst of Sebastian's traumatic memories upon him failed, a disoriented and horrified Theodore engulfed in flames tried to back away from the enraged detective. He is suddenly impaled through the chest from behind by the corrupted Myra. While Myra and Sebastian speak to each other, Theodore stabbed Myra in the neck using the blade hidden within his cane as he claimed the Core to be his. This proved futile however, as the barely phased and provoked Myra then stabbed him through the head, killing him. Theodore's body turned into hardened psychoplasm as he died, and shattered into pieces after falling into the nearby pit.

Theodore appears as a powerful preacher, middle-aged and of African-American descent. His attire throughout the game is a long, black robe adorned with a red scapular, and a red buttoned shirt beneath it. He carried with him a large, wolf-headed cane-sword at all times. Notably, he had a deep scar across the left side of his face.

Though Theodore came across as caring and friendly, he was in truth a master manipulator. He often lied and used false promises to gain people's trust and advance his own motives. He acted like a priestly figure, manipulating the vulnerable with his words like a shepherd to the masses.

When Union was transformed under his corruption, it showed the town in fire, suffering in a hellish landscape. This reflects his consuming ideals to change the world into his own vision through STEM, while leaving everything else to burn. Those who he convinced to join him were turned into Harbingers and Disciples, while the rest were killed or consumed by the guilt he instilled in them.

Although his goal is similar to MOBIUS in controlling the world, his means of control is more extreme than MOBIUS since he sees all humans are nothing more than potential fanatics who will worship him as god when he takes control of STEM while MOBIUS wants to create a peaceful world without war, crime and evil by eliminating free will.

Theodore's powers seem to be associated with fire and brimstone, likely to reflect his nature as a wrathful leader. His words were very persuasive in the real world due to being a master manipulator, but are greatly amplified in STEM, capable of reaching into people and corrupting them with their guilt. He was also capable of reaching into the memories of his targets and bringing out their fears, as well as manipulating enemies and locations to use them to his advantage.

Despite his tall and imposing stature, Wallace was not a trained fighter, as he avoided engaging Sebastian in any physical confrontation. However, he kept a sword hidden within his cane for self-defense and surprise attacks.

Despite him being one of the more important antagonist of the game, Theodore never directly fought Sebastian at any point in the story, resorting on mind tricks and hallucinations to combat the detective. His quasi-boss fight at the end of Chapter 14 consists of Theodore conjuring the mental images of several bosses from The Evil Within.

The Sadist is unleashed on Sebastian in the first leg of the fight. He retains his signature one-hit kill with his chainsaw and must be fled from down the hospital hallway. A quicktime event will trigger at the end of the hallway where Sebastian must pick up the Sadist's chainsaw to finish off his adversary and finish the first sequence.

The Keeper comes up immediately after the Sadist, or rather three of them. This part of the fight is based on the Chapter 7 gas room sequence, only more straightforward as Sebastian only has to fight off his enemies. The last two Keepers will attack in pairs. Once the last Keeper falls, its head safe will open up to reveal...

Laura (Creature) makes up the final stretch of Theodore's boss fight. There are two gas valves in the area that Sebastian must open in order to power up the incinerator. Be warned that opening up each valve takes a considerable amount of time, more than enough for Laura to catch up with the player and insta-killing them. Freezing her with the Warden Crossbow's Freeze bolts before attempting to open any valve to ensure safety. Afterwards, simply trap and burn Laura with the incinerator once (twice on Nightmare+) to end the fight. If Sebastian has managed to build his own flamethrower at this point, using it on Laura will reward the player with the "I'll Take You Down Myself" achievement/trophy.

Theodore's relationship with Sebastian was one of deception from the beginning. He persistently offers the detective his help in taking Lily back from Myra and ridding him of his trauma, in exchange for his loyalty. Sebastian in turn will always refuse his offer, as he has a clear hatred for Theodore due to the man's manipulative nature, god-complex, and utter disregard for human life. His constant defiance earned him Theodore's wrath, who then promptly retaliated by sending numerous Disciples, Harbingers, a brainwashed Liam O'Neal and creatures from his traumatic memories of Beacon to hinder his progress, as well as showing him a false and accusatory version of Lily and warping Union around him into a fiery version of the place.

Theodore at one point had a working relationship with Myra, as he was able to make her trust him enough so that she would allow him to participate in his plan to free Lily. However once his ulterior motives were revealed within STEM, their relationship immediately became antagonistic as they both sought to kill the other. 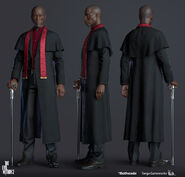 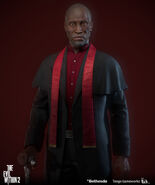 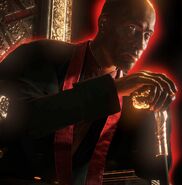 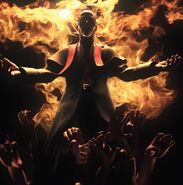 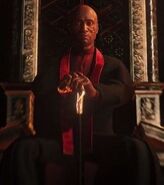 Theodore on The Throne 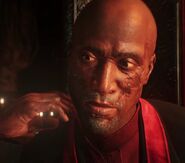 Theodore stabbing Myra in the throat, claiming the Core is his