View source
watch 01:42
Who is The Keeper?
Do you like this video?
Play Sound

"That cockroach. That sycophant. Living off me. Feeding off my work. I'll have to figure out how he got the combination to my safe..."
―Ruvik, furious at how Jimenez was using him

The Keeper is a tall, large-built humanoid clad in what looks to be a butcher or slaughterhouse worker's attire, complete with tall rubber boots, gloves, and an apron. He has a safe for a head, which is completely featureless on the inside save for a mass of pulsing flesh where a face would be. A metal basket is worn on his back, though he never seems to deposit or remove anything from it.

His primary weapon is an oversized meat tenderising hammer with a large spike on the side opposite the head, used to impale a victim through their head. In his other hand, he is most often seen holding a sack filled with the severed heads of his assumed victims; spikes and broken orbitoclasts (a surgical tool used for performing transorbital lobotomies) poke out of the fabric in various places.

While he may seem more mundane compared to Ruvik's other cronies, relying mainly on brute strength in his attacks, he has the ability to teleport to other safes by breaking his own neck. There are usually many spread throughout the area where he must be fought, allowing him to be virtually omnipresent and ensuring no place is safe. The visuals of repeated camera flickers and glitches along with pounding and scratching noises herald a Keeper's arrival.

A dark manifestation of the Keeper is fought as the final boss of The Executioner. He looks identical to his normal counterpart, although is wreathed in darkness, giving him a charcoal-purple coloration, and wields a large Sword in place of the hammer. In addition, he possesses the ability to summon Laura-like arms to pursue his adversaries, akin to those created by Ruvik's Doppelgangers.

The Keeper was born from a combination of Ruvik's memory of the safe where he kept his research, and his unbridled rage. The safe head represents the atrocities of Ruvik's past that he's trying to keep hidden, literally crushing anyone who comes near.

The Keeper made his first "official" appearance in the game during Chapter 7, at the end of which he serves as a boss Sebastian Castellanos must defeat.

Sebastian will be facing off against the Keeper in a sealed chamber with toxic gas constantly pouring in. In order to progress and avoid death by suffocation, Sebastian must incapacitate the Keeper and close the 3 gas valves in the area. While not particularly tough himself, the Keeper can respawn from any of the safes littered about the area. After closing the three valves, the Keeper is seemingly destroyed after Sebastian threw his head safe into a spiked trap and crushed it.

Despite this, the Keeper makes a reappearance in Chapter 13 as Sebastian and Joseph Oda are making their way through an abandoned apartment building. While not directly fought, the Keeper resolves to hinder the duo's progress by setting numerous traps along their way before finally cornering them in a meat locker. Once again the Keeper can be fought or fled from, though killing him here won't prevent his later appearances.

Two Keepers make a final appearance at the end of Chapter 15 as a sub-boss fight before reaching Ruvik. These must be fought and defeated in order to progress.

As the Keeper is the avatar assumed by the protagonist of this DLC, he is not fought. The plot drops several hints that the controllable Keeper is one of many, however, and an empty chamber of what looks to be the previous Keeper can be found near the end of the DLC.

While the true Keeper is not fought, a dark manifestation of him is, and serves as the final boss.

The Keeper briefly returns in The Evil Within 2 during the boss fight with Theodore Wallace, who uses Sebastian's memories of STEM to torment him. After Sebastian defeats The Sadist, he is pulled through the ceiling and dropped into The Keeper's domain, where three Keepers attack him. After the final one is defeated, its head lands on the floor with blood running out, only to have Laura crawl out of it. 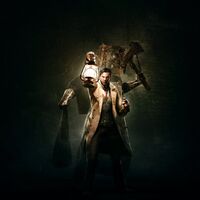 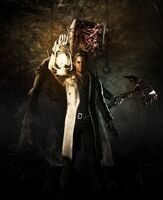 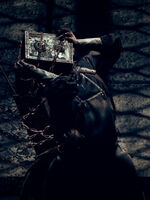 The old Keeper's STEM tub in The Executioner.