View source
watch 01:45
What are the Haunted?
Do you like this video?
Play Sound

The Evil Within
The Assignment
The Consequence
The Executioner

"They lose who they are and become clay, completely reshapable in my image."
―Ruvik, using a metaphor for the claimed consciousness' of the patients connected to STEM

The Haunted are what became of normal people who died while connected to STEM, or were dominated by its effects. At Ruvik's command, legions of these husks beset upon Sebastian Castellanos throughout The Evil Within.

The Haunted appear as mutilated or rotting walking corpses festooned with various nails and glass shards pinned into their flesh, along with having barbed wires or chains wrapped around their bodies. The Haunted bear bluish-white glowing eyes and are clad in the tattered remains of their clothing, though the masked variant encountered later on have relatively more intact apparel.

In The Assignment and The Consequence, a unique variant of the Haunted is featured instead. These ones, while are relatively intact compared to Ruvik's other minions, have glowing sores and pustules throughout their bodies that change colors depending on their current status. Normally white when docile, these Haunted can glow yellow if they became alerted to Juli Kidman's presence, and red when they are hostile. Some of these Haunted may have large clusters of boils on their bodies, which indicates that they turn into a Cadaver when killed.

All Haunted share a taste for human flesh, most specificaly the brain, which they can be seen messily feasting on from time to time when not aware of the player's presence.

The Haunted, although savage and brutal, have been shown to have a degree of intelligence, demonstrating knowledge in the use of a multitude of weapons, ranging from all manner of brutal melee like knifes and hatchets to heavy-duty firearms like sniper rifles and the agony crossbows and can often be seen exhibiting behaviors in combat such as ducking underneath the spinning blade in Chapter 10, zigzagging to avoid bullets, or blocking with their arms to prevent headshots. Many Haunted will also attack in groups and coordinate in an attempt to kill the player. They are also able to create and set up various traps, along with playing dead to ambush unaware foes.

Some Haunted are seemingly more intelligent than others, allowing them to talk, though only in short, repeated and disjointed sentences. Whether by instinct or by choice, the Haunted also seems to have a penchant for torturing and maiming/killing any ordinary people or animals they capture.

The Haunted seem to have a fascination with mannequins. They are seen to be preoccupied with them throughout the game. This is a possible indication that the Haunted are aware of their horrific disfigurements, and view mannequins as reflections of their former appearance before Ruvik transformed them.

According to Shinji Mikami, the Haunted have undergone mutation and are expressing the evil that permeates within them, a reference to the game's name, "The Evil Within".

A single Haunted on its own poses little threat to the player, as they are slow, unintelligent, and fairly easy to kill. However, large groups of Haunted are much more dangerous, as they can easily surround and overwhelm the player, especially in confined areas.

The Haunted are most commonly encountered wielding melee weapons such as hatchets, knives and pickaxes. In later chapters, Sebastian will also have to contend with Haunted armed with ranged or thrown weapons such as dynamite, molotovs, Agony Crossbows and firearms. Unarmed Haunted will punch and kick at the player. If they get close enough, unarmed Haunted can also use a QTE grabbing move, dealing moderate damage if the player fails to shake them off.

The Haunted gain a significant improvement to their AI while playing on AKUMU difficulty, allowing them to attack with much greater ferocity while frequently sidestepping shots and dodging melee attacks. Bloated Haunted will attempt to block shots directed at their upper torso with their large arms, while those armed with Sniper Rifles will almost never miss.

The Haunted make a brief appearance in The Evil Within 2 as targets in the Shooting Range. Cardboard cutouts of various Haunted that Sebastian faced appear as targets to shoot at. While adventuring in the game itself, however, similar creatures called The Lost take their place as main enemies.

The Haunted have many kill animations which they will perform on Sebastian once they've managed to deplete his health. The specific animations depend on what weapon a Haunted is carrying at the time of the kill.

The Assignment & The Consequence

Most of the death animations for Juli are shared with Sebastian, however there are a few that are unique to her in the DLCs. 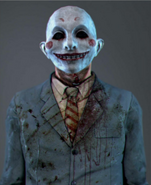 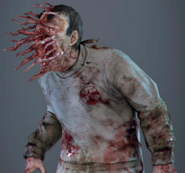 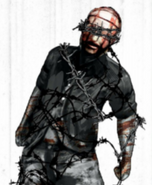 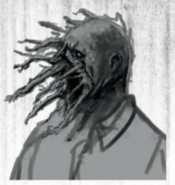 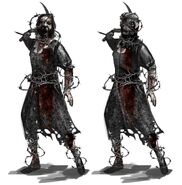 The Evil Within (Comic)

Manifestation of the Echo Falls victims
Community content is available under CC-BY-SA unless otherwise noted.
Advertisement