View source
watch 01:44
Who is Tatiana Gutierrez?
Do you like this video?
Play Sound

"Memories are vague things, indeed. It can be easy at times for memories to be distorted by others. That is why they must be cherished."
―Tatiana Gutierrez

Tatiana appears as a Beacon Mental Hospital nurse, and operates mostly inside the Safe Haven, which as its name implies, is an area within STEM in which its inhabitants are (near)-completely safe from any harm, be it from a monster or self-inflicted. She also covers the role of an active hint giver on occasion, usually when a new gameplay mechanic is introduced (Green Gel and the Upgrade Chair, keys, etc...). Other than that, Tatiana herself has very little interaction with Sebastian Castellanos or Juli Kidman other than providing the former with a means to save gameplay progress.

Tatiana always appears before Sebastian and Juli as a nurse clad in her Beacon Mental Hospital uniform, with a dark red blazer worn over her top. She is bespectacled, and is rarely ever seen without her owl-like glasses. Her facial features are rather unsettling given her rather pale complexion with very prominent cheekbones and emotionless eyes.

Tatiana wears her long brown hair in a tied bun at the back of her head that is normally covered by her nurse cap.

Tatiana speaks in an almost monotonic manner, and has a very dry, sarcastic wit that both Juli and Sebastian find insufferable on occasion. Despite her unfeeling demeanor, however, Tatiana is not malicious, and seems more than willing to help Sebastian however she can, albeit in a manner as indirect as possible.

By the time of the second game, Tatiana seems to have mellowed out considerably. However, she is more likely to crack jokes (despite her ever-so-morbid sense of humor), and even dabbles in unusual (if not outright goofy) antics such as mocking a birthday party upon Sebastian completely maxing out his stats, or starting up a highly comedic shooting gallery for him to compete in.

Nurse Tatiana is first introduced at the start of Chapter 2, as Sebastian wakes up and finds himself in a strange hospital-like building. Noticing his mental dissonance, the mysterious nurse introduces him to the Green Gel, and after stabilizing his conditions, ejects him from the Safe Haven and back into the crashed ambulance on the outskirts of Krimson City. She then remains within the zone for the remainder of the game.

Throughout the entirety of the plot, not much is ever learned about Tatiana. It is unclear who she may be, although a missing Persons poster appears in Sebastian's safe haven with her photo and description, which explains that she disappeared one night while working a late shift at the mental hospital. Players can find this poster roughly at chapter 14. After finding this Tatiana disappears for the remainder of the game.

Juli Kidman encounters the nurse in much the same way her colleague did, by waking up in a strange location with no recollection of how and when she got there. Due to the lack of Gel, keys and upgrades in the DLC, Tatiana does not interact much with Juli aside from offering short banter, laced with her signature brand of monotony and sarcasm.

At the end of the The Consequence, a woman with roughly similar appearance to Tatiana is shown interacting with The Administrator, hinting at the fact that the nurse might have been a MOBIUS agent stationed within STEM to provide safe haven for the organization's assets.

Tatiana returns again within STEM to help get Sebastian back into shape. Sebastian questions how she could possibly be within STEM. Tatiana asks the same question, but regardless, she admits it's nice to see a "familiar face" again. Despite being in a new location like Union, to her, nothing has really changed. Throughout the game, Sebastian can talk with Tatiana in between upgrading his skills, who will have new dialogue and advice to give over the course of each chapter.

Page from the artbook

Tatiana and the Upgrade Chair 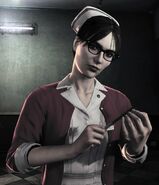 Tatiana talking to the Administrator

Tatiana in The Evil Within 2.

Tatiana throwing a party for Sebastian.
Community content is available under CC-BY-SA unless otherwise noted.
Advertisement