The company was acquired by ZeniMax Media, who publishes Tango Gameworks' games through their subsidiary, Bethesda Softworks. 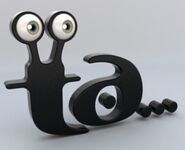 Fun at the office

Tango-chan cartoon on their former homepage

Interior of The Soho