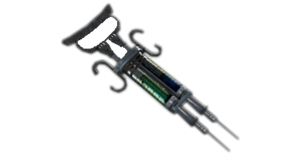 The Syringe is the player's primary means of replenishing health in The Evil Within and The Evil Within 2, apart from Sebastian Castellanos' limited passive regeneration.

The Syringes in the The Evil Within universe are composed of two separate tubes containing nondescript fluids of unknown composition. The liquids are green and blue, respectively. Unlike traditional syringes, those used by Sebastian are unusually large, with a massive ring-shaped plunger handle to accommodate the entire heel of the user's hand, rather than being pressed with the thumb.

A Syringe is consumed immediately from the inventory screen when selected, which has Sebastian injecting himself in the arm with its content to regain a small portion of health. An unupgraded Syringe heals for 30% of Sebastian's base HP in The Evil Within, and 40% in the sequel.

Juli Kidman regenerates her health naturally and thus has no need for Syringes.

Second Chance is the Syringe's Special Upgrade, that allows the player to automatically use up one Syringe to restore Sebastian's health when receiving fatal damage. This effect does not trigger on scripted death sequences or when struck by enemies with instant-kill moves.