Chapter 14: Burning the Altar
The Spawn are creatures found in The Evil Within 2, first appearing in Chapter 3 after completing the Resonances main quest.

Spawns are frightening abominations that appear to be a fusion of at least four people. Their front portion has three heads fused roughly into a triangular assembly, with a maw filled with razor sharp teeth. Another head juts out from the creatures' rear, providing them with a near-360 degree view of its surroundings, making it hard to sneak up on them. Spawns don't have conventional legs per se, but rely instead on numerous clawed hands for locomotion, which they can use to deadly effect against their prey if need be.

Having a somewhat dog-like behavior pattern, Spawns either roam Union in search of prey, or lie in wait for them to pass by. Once a victim has been spotted, they will scurry up to them quickly and attempt to pounce and bite them. They are fast, persistent and typically travel in pairs, making them formidable to those who aren't prepared, and their constant sidestepping makes combat difficult for those who are.

A concept of numerous Spawn rushing to attack Sebastian at once, some crawling down Aperture's tendrils to reach him 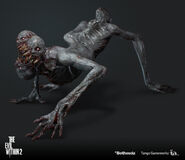 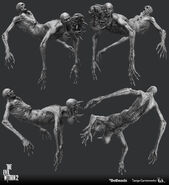 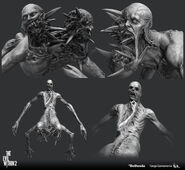 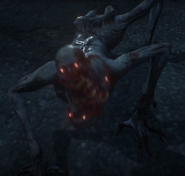