"Guardian of the church, bred in a cult laboratory beneath the cemetery, it was raised on sacrificial victims and craves human flesh."
―Model viewer description.

The Sentinel is a boss encountered in The Evil Within.

The Sentinel used to be a regular wolf that guarded the church from intruders, before being experimented on by the fanatical cult in the labs underneath the premises. There, as it mutated, it was fed the remains of sacrificed victims in order to conceal the gruesome results of the experiments. It soon grew a taste for the "offerings" it was given, and its appetite grew more and more until it would eat up to six bodies a day, and would still howl in dissatisfaction, frightening some of its keepers that they would be devoured next. It was thus kept chained in a special cage in the catacombs.

The Sentinel appears as a greatly enlarged black wolf with an oversized eye and a second mouth located in its neck, as well as barbed wire and several steel fragments strewn on its back and along its legs and body.

The wolf's original head is non-functional.

The Sentinel is encountered and must be fought at least once at the end of Chapter 6. Initially sleeping in a metal cage, the beast is roused from its nap by the sound of a metal door closing back down, and bursts from its bonds through a breakable wall and out into the nearby courtyard where it must be fought. After a brief game of cat and mouse, Sebastian deals an incapacitating shot to the creature, and hurriedly squeeze past the church gates with Joseph to move on.

However, despite having fought off the creature, Sebastian still has a problem on his hands, as Joseph, having dropped his glasses in the scuffle, cannot see anything at all. Left with no other choice, Sebastian decided to head back into the yard and retrieve the spectacles.

The Sentinel can be killed at this point, but it is optional. If Sebastian goes straight for Joseph's glasses and back out, the yard cannot be re-entered a second time. If the creature is instead slain, it will drop a pool of

7,000 and prompts a quick one-liner from Sebastian himself. 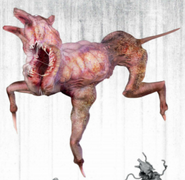