The Semi-Automatic Handgun is a usable weapon briefly in The Assignment, and a proper firearm in The Consequence, being one of two firearms obtainable by Juli Kidman in said DLC next to the Sawed-off Shotgun.

Due to the general lack of usable firearms in The Assignment, the Semi-Automatic Handgun (referred to as just "Handgun" beyond this point) is mostly inaccessible throughout the DLC's two chapters. It becomes briefly usable during Chapter 2 after Kidman got her foot stuck under debris and has to defend herself against waves of Cadavers and The Haunted, with the final enemy being Shade. The Handgun has a standard magazine size of 7 and unlimited reserve ammunition, but slightly higher recoil compared to that of The Consequence. It promptly runs out of ammo after this section and becomes unusable.

The Handgun is obtained late into the first half of The Consequence. It is a very capable weapon, possessing such critical hit chance that single headshots may kill most enemies instantly. Ammo is also not much of a concern, since slain Haunted drop them in copious amounts anyway.

With that said, the Handgun's chief drawback is its uncomfortably tiny reserve capacity of 10, making it so that Kidman can only carry two fully loaded magazines on hand at anytime, plus three additional shots. This can prove troublesome when faced with a large mob of enemies, though thankfully this does not happen too often.

Kidman loses the Handgun at the start of the second half of the DLC. While she does gain a new one later on, it serves little purpose beyond being a simple plot item, as ammunition for it is almost non-existent in that chapter. 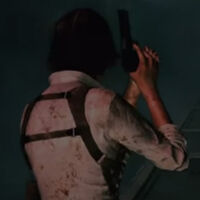