View source
watch 01:46
Who is the Sadist?
Do you like this video?
Play Sound

"A creature born from the mind of a murderer merged with Ruvik's madness. He has lost himself to rage, becoming murderousness personified."
―Model viewer description

The Sadist appears as a very large, almost overweight man wearing a spiked metal mask which covers most of his face along with a bloodied and dirty white tank-top, brown trousers and black work boots. He has stained, scraggly grey hair that can be seen up close, and his eyes are blue, though with a whitish-cloudy discoloration to it as if he has cataracts.

His main weapon is a large chainsaw, which he uses when attacking and pursuing Sebastian Castellanos. Other than that, he also employs a big and bloody meat cleaver, though its use in the game is very brief.

The Sadist is the first enemy directly encountered during the game in Chapter 1. Despite acquiring the knife shortly before encountering the Sadist, it is not possible to kill him without going to extreme lengths, (see Knife for details). The player should instead flee and attempt to hide from him.

After escaping him at the beginning of the game, the player faces the Sadist again as a boss encounter at the end of Chapter 3. The Sadist must be killed during this encounter, as the player requires his chainsaw to unlock a gate that is blocking the way. Killing him with a stealth attack unlocks the Knife Beats Chainsaw achievement.

Despite his apparent death, the Sadist appears again in Chapter 6, breaking through a large door and attacking Sebastian after he is separated from Joseph Oda. He behaves the same as in Chapter 3 except there is significantly less space to avoid his attacks.

The Sadist makes a last stand in Chapter 15, when he emerges from the exit after the final horde of Haunted. He wields a rocket launcher, but Sebastian takes cover and fires at the Sadist until he pulls out his chainsaw, charging at Sebastian. Sebastian defeats the Sadist once and for all, escaping Ruvik's Eye.

During the final boss battle with the Amalgam Core, the Sadist's corpse falls from the sky, landing next to an impaled Sebastian, who quickly picks up his dropped Rocket Launcher, while the rest of the corpse falls into the vortex below.

Labeled as subject CB-212 in STEM reports, the Sadist was a convicted murderer connected to the STEM system. Like the Keeper, his objective was to destroy all other STEM test subjects in order to escape. While killing various Haunted, he encountered The Keeper's daughter, who initially thought the Sadist was a good person because he too was killing the monsters. However, when she tried to assist Sadist in helping collect memory tokens, he grew angry. Fearing for her life, she fled from him without his noticing.

In order to halt STEM's influence over his daughter and get out, the Keeper was instructed to kill Sadist to advance, confronting the maniac in the Victoriano family's barn where he will engage him with a mob of The Haunted. Defeating the Sadist unlocks his chainsaw as a weapon that can be used by the player, available for purchase in the upgrade store.

A separate Sadist, known as the RPG Sadist, is the fifth enemy boss in The Executioner. Known as Subject CB-205 and was purportedly an ex-soldier in the real world, he is otherwise identical to the normal Sadist except for his choice of weapon. Upon defeat, his Rocket Launcher is unlocked and available to buy in the upgrade store.

The Sadist briefly returns in The Evil Within 2 during the boss fight with Theodore Wallace, who uses Sebastian's memories of STEM to torment him. Sebastian finds himself back in Beacon, in the same hallway he originally fled through. After the Sadist toys with him briefly, Sebastian finally faces down his fears of STEM and has finally had enough of being toyed with and being afraid. He kicks a gurney into the Sadist, which gives Sebastian an opportunity to get behind the Sadist and stab him in the neck with his knife, incapacitating the Sadist. Sebastian looks to the elevator but refuses to run, instead taking the Sadist's chainsaw to finish him. In a last ditch effort to save himself, the Sadist pulls a butcher knife and forces it into the running chainsaw, but in his weakened state he is quickly overpowered, and Sebastian forces the chainsaw into its shoulder, cutting through his torso nearly bisecting him, and finally freeing himself of his first tormentor within STEM.

The Sadist has three separate instant kill moves that he employs should he manage to catch Sebastian with his weapons. 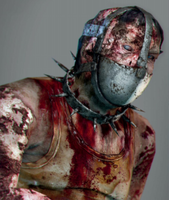 The Sadist revving his chainsaw in the launch trailer

The Evil Within (Comic)

Intro of "To the Slaughter"
Community content is available under CC-BY-SA unless otherwise noted.
Advertisement