The Evil Within - Chapter 2: Ghost Town

"His death was an accident, but deep down I knew it was my fault."
―Ruth, regarding her father

Ruth Shaw is a supporting character in Ghost Town, the second chapter of the Evil Within comics. She is a former flight attendant wracked with guilt who finds herself thrust haplessly into the encephalon ofSTEM.

Formerly a demonym of Silver River, Ruth had a rough life from a young age, as early as around seven or eight, by then her mother already having left her father for an unknown reason, possibly his lack of wealth, and leaving Ruth behind with him.

Ruth attended school at St. Judes, and was often babysat by her teacher, Mrs. Leary when things got busy. Ruth had a decent relationship with her father, the two often joking with one another, though she often gave him a hard time on account of that the two weren't terribly well off financially. One day, her father came home with a gift for his daughter; a Polly doll, much to Ruth's chagrin. Ruth refused the doll, referring to it as "cheap trash". Her father, distraught, vowed to get her the fancy doll she wanted, and told her he'd pull a triple shift at the power plant he worked at to make ends meet for her, to Ruth's delight. Shortly thereafter, Ray was maimed in an accident at the factory, both of his arms being torn from their sockets in a state of delirium.

No one to turn to, Ruth was quickly put into state care, plagued with the knowledge that it was her ungratefulness that lead to her father's demise.

Into adulthood, Ruth swore she'd never come back to Silver River, and became a flight attendant so that she could get as far away from the town as quickly as possible.

Whilst working on a long haul from the far east, Ruth sat down for five minutes to take a break, and awoke inside her hometown, Silver River, greatly to her disbelief. Ruth, baseball bat in hand, traverses the mysterious ruins with an ex-soldier named Jack, who suffers from PTSD. They soon learn that the "things" they see in the distance are anything but human.

Soon, the two come to meet the protagonists, Dana Robinson and Paul Carey, much to everyone's surprise. Jack questions whether the two are real or not, and Ruth quickly dismisses his ramblings and advises that they get out of the open in the street. As the four join up, Ruth suggests they take her help, as she can guide them around the town, having used to live there. As they travel, they introduce themselves to one another more. Before long, they find their path blocked by a car crashed through the window of a toy store, dolls strewn about everywhere.

Dana looks into a mirror lying near the car and experiences a headache, and sees visions of Ruth's past. She is brought back into the present when Ruth begins speaking to her, asking sadly where she got the Polly doll in her hands. Dana tells her she found it lying on the street, and Ruth lies to Dana, telling her she used to have one, and that she loved it to death. Dana asks Ruth why she left Silver River, and she tells the truth.

As they talk, Jack spots a light coming from a building on a hovering landmass, which turns out to be St. Judes. The quartet make their way there, sticking together along the way. Once they reach St. Judes, Ruth remarks that the place gave her the creeps, even before it was altered by STEM. When they enter the building, they find blood strewn about the floor in front of the doorway, and dripping downward from many upright orifaces.

As Ruth continues giving them directions, they come across an old classroom, and proceed to examine the drawings, which depict sunflowers and cockroaches. Ruth postulates that the place has been changed. As they continue walking, Paul tells Ruth about their run-in with The Keeper at the hospital as blood begins dripping in the background. Jack tries to keep everyone focused, but Ruth notices a peculiar smell from up the stairs, where the blood was dripping.

They head up and into a room with hanging bodies, sent into a frenzy as Laura appears from a pool of blood. As the four race out of the room, Ruth bars the handles shut with her baseball bat as the others begin running down the hallway, only to find their path blocked by acid sprinklers, they race back, Laura beginning to break through, and ascend an alternate staircase after Dana. Laura breaks free and races after them, shrieking and climbing along the walls. They become trapped in a room with a locked door, and race to break through as a heated grid slides towards them. They kick it open in time, believing the grid to have killed or stopped Laura when it passes the doorway.

They ignore the other locked doors and head straight down and through the last door, momentarily believing themselves to be free, though in actuality they are atop a transmission tower, and must make their way across the top steadily. Ruth doubts that she can do it because she's afraid, though Dana won't leave her behind, and encourages her. The transmission tower suddenly shifts, tilting towards the cliff across from them. Ruth stops again, afraid, and Dana once again tells her that everything will be fine. As they are talking, Laura sneaks up beneath her and lifts her hand through the lattice, driving her claws into Ruth's back, killing her. Dana cries out in horror as Ruth's body falls from the tower, which has now been set ablaze.

Ruth with her bat 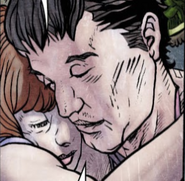 Young Ruth and her father 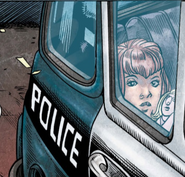 Ruth with the doll her father gave her

The last sight of Ruth