"This military anti-tank rocket launcher is both large and heavy which restricts movement as well as safe operation."
―Inventory description.

The Rocket Launcher is an unlockable weapon in The Evil Within and its DLC The Executioner.

The Rocket Launcher offers devastating firepower at the cost of its ammunition being nowhere to be found, as well as pinning Sebastian in place it is equipped. It is good for crowd control, as long as the intended targets are not too close to the player themselves as the splash damage is significant.

It is used by the Sadist in Chapter 15, and by Sebastian himself during the boss fight with Ruvik after obtaining it from the corpse of the very same Sadist he fought a while back. The Rocket Launcher has a liberal amount of ammo to use (15 shots), and must be shot at the boss several times to weaken it, at which point the battle moves to the next phase.

Completing the game on any difficulty unlocks the Rocket Launcher for Sebastian's own use. It comes with 21 shots, one of which is initially loaded and virtually cannot be resupplied at all, nor can it be upgraded.

The Rocket Launcher is unlocked for use after defeating the RPG Sadist.

It retains more or less the same properties as the one used by Sebastian in the main game, though it can only hold a maximum of 10 shots after upgrades and is aimed using an on-screen reticle rather than the scope. This launcher does not pin The Keeper in place when equipped, though it still requires him to stop moving in order to fire.

Unlike the one used in the main game, The Keeper's own launcher can be upgraded, and additional rockets can be purchased at the shop. 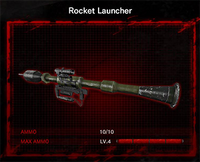