"A creature generated by Ruvik's desire to remain unseen by others. It changes colors to blend in with its surroundings and uses its long tentacles to ensnare the unwary and slay them."
―Model Viewer description.

The Quell is a boss encountered in The Evil Within.

The Quell is an insidious and sneaky creature resembling a grotesque mix between an octopus and a vaguely humanoid body, it's head drawing similarities to that of a lamprey. It's massive appendages are very strong, allowing the Quell to anchor itself to walls and ceilings with ease, while also hooking and supporting both the weight of itself and its prey upon capture. It has no eyes, and much of its face is dominated by a two-part large maw with rows of crooked teeth that could shoot out to bite prey with.

The Quell has the ability to turn itself completely invisible, allowing it to set up ambushes without being detected, which it often does with the help of its many tentacles that lets it anchor itself to walls and ceilings. The creature constantly excretes a murky microfibrous liquid from its mouth and other invaginations, which is presumably saliva as it doesn't seem to possess any harmful qualities.

The Quell makes its first appearance in the sewers ofKrimson Subway throughout Chapter 14: Ulterior Motives, where it is seen on several occasions sneaking up on unwary AlterEgos, though it tends to stay hidden in the background. It isn't after until the dark, gunk-mired corridor with iron grating before the final fenced off operation area in the sewers that the creature finally decides to reveal itself, initially masking as the crank generator used to power up the exit elevator, the creature remains hidden until Sebastian Castellanos comes over to restart the device, at which point it reveals its true form and tossing the detective down into a nearby pit where it is fought.

Damaging the creature enough will make it cloak and hide somewhere to lure Sebastian towards it, at which point it will seize him and attempt to perform an instant-kill move. Though invisible, the creature's location can be pinpointed with its hissing and the drool that constantly drips from its mouth. During this phase, the Quell may also release writhing slug-like spawns that hone in on Sebastian and implode, causing much damage and potentially knocking him down. 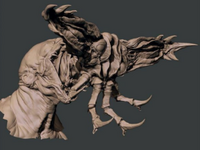