The Evil Within
The Assignment
The Executioner (Mentioned)

Isaac C. Singleton Jr.
Neun is an enemy encountered in The Evil Within and The Assignment.

Neun is the conjoined twin brother of fellow mutant Zehn. Abandoned at birth, Neun and his brother were taken in by the members of the Cedar Hill Church cult to serve as guinea pigs for their experiments[1]. The twin were surgically separated and administered a special growth serum that caused rapid physiological changes. Within the first two days of the experiment, the infants grew to be as large as a young adult, but also left heavy mental scarring in them.

Physically, Neun appears much less malformed than Zehn, though his mentality paints a different picture. While Zehn was left a gibbering lump after the experiment, Neun became exceedingly violent and angry, and had to be heavily restrained to keep his homicidal urges in check. Traces of various cuffs and other binding implements can still be found on his body.

It is unclear whether Neun was in the same state of mutation when encountered as he was during the experiment, or that he and Zehn were additionally transformed due to the influences of Ruvik, though if such was the case it did little to curb his thirst for violence.

Neun, along with Zehn, are encountered in Chapter 6: Losing Grip on Ourselves. As Sebastian Castellanos and Joseph Oda make their way through the mazes of graves leading to the church, the duo encountered Zehn, who is shackled to a small cage, and Neun who bursts in shortly afterwards. Both brothers must be defeated in order to progress.

Despite the prior defeat, Neun survived the encounter and made his way towards the church courtyard where he ran afoul of Juli Kidman and her search for Leslie Withers. Here Neun cannot be fought, and must be evaded at all costs. When Juli makes it to the gate, Neun will realize she made it past him, and angrily yanks at the bars to no avail.

Neun is not met directly in The Executioner, and there is no STEM chamber corresponding to him in the manor's basement, however Zehn's Subject Transcript implies he is present in one way or another.

During combat, Neun serves as a beefed-up Haunted that attacks mainly with his fists and rushing charges in tandem with his brother. He also has a grab move that hoists Sebastian up by his head as he crushes to deal heavy damage, though this can be interrupted if Joseph shoots him. Should he manage to grab Sebastian while the player is low on health, Neun will execute an instant-kill attack.

Despite his armored head, Neun still takes increased damage when shot there, and scoring a headshot as he charges has a chance to stun him briefly. Hard-hitting weapons like the Shotgun and Sniper Rifle are recommended, though the latter only when there are ample cover to use. If led carefully, thrown Grenades can also damage him greatly, and the Agony Crossbow is useful if managed. 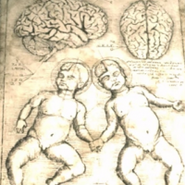