View source
watch 01:33
Who is Myra Hanson?
Do you like this video?
Play Sound

"Tenacious and no-nonsense - my kind of woman."
―Sebastian, writing about Myra

Detective Myra Hanson was the former partner and estranged wife of Sebastian Castellanos, her superior officer whom she met at work. Despite Myra's stern professionalism, she and Sebastian quickly bonded and the duo worked together as an effective team. Four months into their partnership, however, Myra was shot while on duty and was pulled from field service, and another detective was assigned in her place. Sebastian recalls proposing to Myra while she was recovering to great (albeit unexpected) success.

Their relationship quickly developed into marriage—the result of which was their daughter, Lily Castellanos, who allegedly died in a tragic housefire when she was five. Myra was convinced that their daughter did not die that day, however, claiming that the fire was staged in order for an unknown party to abduct her. It did not help that Sebastian was in denial about everything, and a schism began to grow between the couple.

Myra was also investigating the disappearances surrounding Ruben Victoriano's STEM project at the time of the tragedy, and after connecting the dots, was convinced that the two are related somehow. She went missing shortly afterwards.

As depicted in a flashback of Sebastian's, Myra has pale white skin, light blue eyes and peach lips, with her blonde hair tied up into a neat bun with a pearl-like hair-clip keeping it in place. On her left hand she still wears the original wedding ring that Sebastian gave her when he proposed.

For the majority of the game (up until the very end), Myra's form in STEM seems to be a shell of her formal self, with psychoplasm, in the form of a gooey-like white substance, being the main element she controls. She wears no clothes and walks bare-foot save for a plain white robe which flows down to her legs. The "fabric" ends in the shapes of lumps or drips representing the white substance that covers her. It covers her upper body, including her arms and her chest, but reveals the lower half of her body. The robe also features long, thick sleeves, as well as a hood that just covers Myra's eyes.

In terms of her physical features, Myra's eyes have strands of the white substance covering them in a net-like conformation, which droop down past her cheeks; she still, however, keeps her original earrings. She also keeps original hair style, with the exception of some loose strands, which slightly cover her face. When Myra is enraged, the net dissipates to reveal a set of numerous glowing red eyes, similar to those of the Watcher. Her body is significantly paler, with the white substance creating a vein-like pattern from her lower torso all the way down to her legs, mimicking pants.

When hostile, Myra can harden the white substance into solid constructs akin to plaster. She can use this ability to transform her arm into a sharp, blade-like appendage.

Not much is initially known about Myra's personality other than her noted tenacity and straight-laced professionalism in the workplace, as described by her husband. In what little information gleaned at her life prior to her disappearance, Myra was supposedly a very stern and serious person, but was in no way unfriendly. She seemed to have mellowed out considerably after their marriage and Lily's birth, showing a more sweet and considerate side to her.

Myra has strong maternal instincts, as shown when she kept to her beliefs that her daughter didn't die in the housefire, and went to extreme lengths to track her down and rescue her despite the repeated protest from everyone, her husband included. Unfortunately, this also allowed other, more nefarious parties to manipulate her judgment, resulting in her guilt, anger and obsession taking her over and rendering her into a monster that almost ruined her own plan.

Ultimately, Myra is a selfless woman who loved her family more than anything in the world, and would gladly give up her life if it means their survival.

Myra appears during the ending cutscene in The Consequence. She approaches the now conscious Juli Kidman and tells her that her superiors are expecting a debriefing from her. She is then called over by name, by an associate. Juli, who had learned Sebastian's past earlier, repeats her name, pondering if the two are one and the same. Myra is now shown to be a member of MOBIUS and has the mark of the organization on her hand.

Myra appears briefly at the beginning of the game talking to the father before he is sent inside STEM. Then later she is briefly mentioned by some of the other subjects. One calls her an old hag, meaning that she may be disliked by the subjects that go into the STEM.

It is revealed that Myra disappeared from the outside world to join MOBIUS when she discovered that they had her daughter. In the 3 year interval between the events of the first and second game, she developed a plan to save Lily and take down MOBIUS at the same time. She doesn't reveal any of this to Sebastian as he is being watched, and to keep him out of harm's way.

When she enters Union to execute The Plan, her ally Theodore betrays her, revealing his hidden agenda. This makes her lose control and she transforms into a corrupted version of herself, making her the third antagonist of The Evil Within 2. Her influence manifests through the white bubbling substance found throughout the game.

As her maternal instincts kick in, she takes Lily away after Sebastian had eliminated Stefano, using her powers to devastate the remnants of Union as Sebastian pursues her to Limbo at the centre of STEM. She hides her in a recreation of their old home to protect her and ends up confronting Sebastian as the Matriarch. After the fight, she returns to her normal self and asks Sebastian to take Lily away from STEM. She then reveals to Sebastian that the final part of the plan was for her to take over as Core so she could eliminate all of MOBIUS in one go through the chips implanted within every member's brain. However, in order to do this, she has to stay behind. After finally having closure between the two and saying their tearful farewells, Sebastian leaves Stem with Lily. Myra is left behind, and as Union collapses, she makes her final sacrifice and destroys MOBIUS. 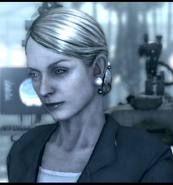 Myra talking to the father

Potential photo of a younger version of Myra. Found within main game's files.

Myra's missing person's poster in Sebastian's Office during The Consequence. 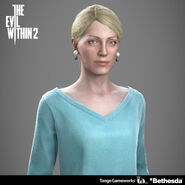 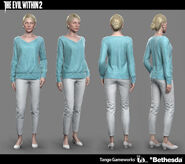 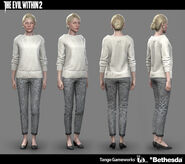 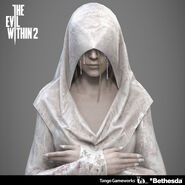 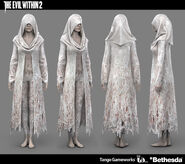 Concept of Lily's doll of her mother 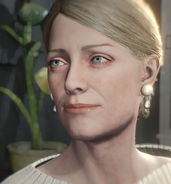 Myra being held by The Watcher

Sebastian and Myra have their final kiss