In addition to his arsenal of firearms and explosives, Sebastian Castellanos also has access to several melee weapons with which he can use to fight off the horrors of Union.

As ever, melee weapons (bar the Bottle, which alerts every enemy within earshot when smashed against a target) are the only truly silent ones in the game, which lets Sebastian get the drop on his enemies without attracting undue attention. Some of these melee weapons have unique skills associated with them as well, which lets Sebastian pull off kills without putting himself in much danger.

Three (technically four) melee weapons are available for use in The Evil Within 2.

"This large Survival Knife is perfect for Sneak Kills and getting into places that are chained shut. It also doesn't require any ammunition."
―Inventory Description.

The Survival Knife is Sebastian's personal melee weapon throughout the entirety of the game. It effectively replaces Sebastian's fists from the first game for hitting enemies, breaking locks and smashing boxes, and is generally used whenever the melee button is hit without either of the three other melee weapons equipped.

The Survival Knife is pitifully weak in direct combat, dealing a measly 7 points of damage on hit. As such, it is pitifully weak on anything larger than a Lost, and against anything on any difficulty above Survival. Despite this, it is the only "permanent" (i.e. lasting many uses) melee weapon available at all times. The knife is the only melee weapon capable of performing every stealth kill ability available.

The Survival Knife is granted for free at the end of Chapter 2, being lodged into Sebastian's shoulder by Stefano Valentini, and is used from then on whenever the player gets into a scripted situation where a melee weapon is required, regardless of what is currently equipped.

"When acquired, a Hand Axe temporarily replaces the Survival Knife in combat. It can instantly kill some enemies, but will break after a single use. Hand Axes can be found throughout Union or taken from enemies."
―Inventory Description.

The Hand Axe functions the same as it did in the first game, being a one-time use melee weapon that instantly kills Lost and does extra damage to larger enemies. Axes are only single-use if used to strike an enemy: using one to smash environmental objects such as crates or car windows will not destroy it. Axes can be looted from enemies or found lodged in the environment, and are generally more common than they used to be, though their power on higher difficulty levels appear to have been reduced, as a Lost can survive two hits on Nightmare and up before dying.

Hand Axes cannot be used in conjunction with the Brass Knuckles, as the latter takes precedence over the former, though the player is still able to pick up fresh axes if currently carrying none.

The Brass Knuckles return from the first game as the same set of extreme-power melee weapons, now dealing 150 points of damage per hit, capable of obliterating most non-boss enemies with a single punch. They are now a toggle weapon, and need to be "switched on" in the weapons radial menu to use, at which point they effectively replace the Survival Knife until "switched off". Most Stealth kill moves are compatible with the Brass Knuckles with the exception of Predator, though enemies can only be Sneak killed from the front and only when staggered.

Despite the extreme unarmed damage boost, the Brass Knuckles have a shorter effective range than the Knife, requiring most enemies to be within hugging distance to properly score hits; they also prevent Sebastian from using Axes until unequipped, though he can sill pick one up if he doesn't have any on hand. While a solid punch with the Brass Knuckles deals as much damage as a Magnum shot, it is vastly outclassed by the amount dealt with the Knife's Stealth Kill.

Clearing the game on either Nightmare or Classic once will unlock the Brass Knuckles for every subsequent playthrough on that same save file.

"Sorry, not enough liquid in here to give you a buzz, but you can throw it to distract enemies, so it's not totally useless."
―Inventory Description.

The Bottle is used mostly to distract enemies, much like in the first game, though opportunities where one can be used offensively do exist. It notably is the only "noisy" melee weapon in the game, as every possible use of the bottle involves smashing it somehow, which will alert every single enemy within earshot.

Bottles are now a proper part of Sebastian's arsenal, and up to five of them can be carried at any given time. Other than that, the strategies from the previous game still apply. Spare bottles in the inventory can be automatically consumed to break free from an enemy's grasp with the Bottle Break skill, though special monsters have unique attacks that bypass this and kill Sebastian instantly.

Stealth kills are made with the Survival Knife, and are instantly lethal on most lesser enemies, dealing 150 damage per use, though Hysterics and Laments require two such hits to kill. 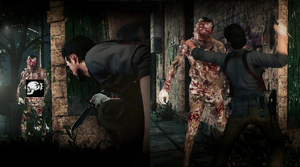 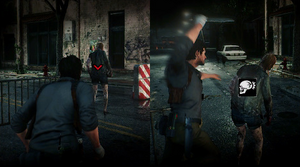 Sebastian performing a Predator kill on a Lost.
Community content is available under CC-BY-SA unless otherwise noted.
Advertisement