Elizabeth Saydah
The Matriarch is a monster created by (and from) Myra Hanson that serves as the final boss of The Evil Within 2.

The Matriarch manifested from Myra Hanson's near-fanatical desire to keep her daughter safe within STEM at all costs, even from those dear to her.

The Matriarch in its full form consists of a very large humanoid body from the waist up. Its face is severely deformed, almost skeletal-looking, and its body is covered in numerous lumps and boils. A total of four weak spots are concealed by such deformations: one in its stomach, two on the shoulders, and one in its mouth. The Matriarch is firmly rooted to the ground, though it can swivel around with relative ease.

It seems to be able to excrete, or at the very least composed of psychoplasm, the same whitish sludge that forms the The Watcher, though not as viscous, since Sebastian's movement is not hindered by it, as well as the Effigy, though not as solid. Upon being defeated, the Matriarch dissolves into a large pool of this sludge, while a small portion of it transforms back into Myra Hanson.

The Matriarch is fought near the end of Chapter 16 in a roughly circular arena, half of which is dominated by the base of the creature itself.

During the first phase, the Matriarch is weak around the abdomen, which will glow orange to serve as an indicator. It is aware of this, however, and will occasionally cover its midsection with one hand while smacking down with the other in Sebastian's general direction. The Matriarch will use both hands if it is not occupied with doing so. Burst the weak spot in its stomach to proceed to the next phase.

The Matriarch's weak spots then shift to its shoulder blades during the second phase. These are normally hidden behind its body, but are briefly vulnerable after its fist slam attacks. These hit hard, however, and have a rather sizable splash area, so the player must pre-empt each attack in order to sidestep them in time; failing to do this will result in Sebastian getting knocked down and badly hurt, while allowing the Matriarch to recover and shield its weak spots. During this stretch of the fight, the Matriarch will also start spawning spiderlings in large amounts in an attempt to overwhelm the player, or at least harass them enough to throw off their aim. These can be stomped, or blasted with a shotgun to take down large clumps, and will drop precious resources when slain.

Shooting off either arm of the Matriarch then results in a quasi-quicktime event where Sebastian is grabbed by the severed limb and must blast at the exposed weak spot to free himself. Careful aim is required here, as the player is locked to using only the basic pistol. Failure to do so will result in death. The Matriarch will then sprout another limb from her rear, spiderlings will spawn again and the fight continues. During this third stretch, the Matriarch can use her new limb to smash into the ground, either knocking down and damaging Sebastian, or sliding it across the battleground to swipe him off his feet. Randomly, that arm can be planted into the ground to sprout several gooey arms to grab Sebastian similar to the fight with The Watcher. The battle continues until the remaining arm is destroyed as well.

After both arms are severed, the Matriarch will drop to the ground, though will attempt one last-ditch attack with its mouth. A large weak spot will appear there, and must be blown up to finish the battle. 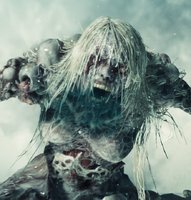 Sebastian Castellanos faces off against the Matriarch

The Matriarch's second phase, after its first weak spot has been destroyed

The Matriarch's face dissolves as it is defeated
Community content is available under CC-BY-SA unless otherwise noted.
Advertisement