The Evil Within Wiki
Register
Don't have an account?
Sign In
Advertisement
in: Characters, Female characters, Living characters,
and 3 more

Unknown
Marta Martin is a main character featured in The Executioner DLC, and is the daughter of the protagonist Pedro Martin, who has to take on the form of The Keeper and make his way through the Victoriano Manor to find her.

Marta appears to be in her mid-to-late teens. She is of average height and slim build with pale white skin, and wears her long, blonde hair at shoulder-length. Marta's eyes are amber and her lips are light peach.

Marta wears a short-sleeved blue dress with a white collar for the entirety of the DLC, with black pantyhose and ankle-height leather boots underneath it.

Based on her noted interactions with the inhabitants of STEM, Marta seems to be a generally kind-hearted, friendly and considerate person, being able to meet and talk to even some of the more vicious members of the realm without being killed or antagonized.

There is a certain level of naïveté to her personality, as she initially believed the Sadist to be a good person, simply because he was the one killing the monsters around them, and was friendly towards Zehn despite his unusual demeanor before he started acting strange and chasing her around.

Despite this, she has a noted distrust for the Haunted Joseph Oda and thought he was a mad man that she should avoid.

Marta first appears on a missing persons poster with her father, Pedro Martin, on a notice board at the Krimson City Police Department Precinct.

Sometimes prior to the start of The Executioner, Marta Martin was one of the many test subjects hooked up to an experimental version of the STEM machine. Within its worlds, she was free to roam without being in any apparent danger from its inhabitants. She does, however, suffer from a slow mental degradation natural of any human connected to STEM, and must be restored by finding and eliminating the other test subjects that she interacted with.

As the Keeper kills them, Marta's own mental degradation slows, only to suddenly pick up again, even quicker than before, which MOBIUS eventually realizes is due to her father himself reading her notes. Upon finally reaching her, a dark form detaches from her father's avatar and takes the form of the Dark Keeper, who puts her in a cage to exist within STEM forever. After managing to take down his dark counterpart, the sounds of Marta being freed from her containment is the last thing her father hears before being ejected from STEM.

The last scene of the DLC shows Marta standing next to her father lying in the STEM tube, now at peace and possibly surviving the mental trauma of his self-induced separation.

As noted in the Final Research Report, Marta and presumably her father as well are currently in MOBIUS custody in order to monitor her psychological patterns.

The doctor said you were going to come help me. Are you ever going to get here? There are monsters all over the place. I'm going crazy.
"
―Entry 1

"Are all these other people alive? Are they dead?"
―Entry 2

"I saw some guy killing the monsters! I think I should go meet him and see what happens. He might know Dad. But just in case he's a creep I'm going to leave my letters and stuff here."
―Entry 3

"That guy said he was a killer and that his job was to kill monsters. He said that he was collecting those weird tokens and made me look for them, but when I tried to put one in my pocket he started screaming and got this scary look in his eyes. He might kill me if I try to run away, he might kill me if I don't."
―Entry 4

"Is everyone going to turn into a monster?

There was a tall guy I walked with for a while because he was lost. He said he couldn't remember where he came from.

He was always talking to his brother even though you couldn't see him. He started to freak me out so I got out of there. Then he started chasing me and, when I looked back, he was turning into one of those things.

Is that going to happen to me? This place is so weird. Everything from before I came here seems like a long time ago."
―Entry 5

"How did I get here anyway? I try to think, but I can't remenber. I think it was therapy, but Dad and I fought about it? He said that Ruben guy might be able to help me, but he didn't trust him. But I had to try."
―Entry 6

"I'm all right. The guy with glasses didn't look like anyone I should be talking to. I can still hear his laughter in my head. I don't think he knew who he was anymore. I think the trick to keeping my mind together is to think about all the stuff I'm going to do when I get out of here."
―Entry 7

"What was my doctor doing here? I saw him walk down the hall."
―Entry 8

"I know I must have seen all kinds of scary things, but I can't remember, so I don't feel scared at all."
―Entry 9

"I don't know what to do. I keep forgetting Mom and Dad's names. It's happened like five times now... I can't believe I'd forget something like that. I should tattoo them on my arm or something."
―Entry 10

"The shaking won't stop. I can't remember Dad's face. I'm slowly forgetting who I am. There are all those monsters around. It's like I don't even care if they get me anymore. But at least I want to see Dad one last time."
―Entry 12

"Something is getting closer. I can feel it. I guess this is it. Sorry, Dad. I know you tried."
―Entry 14

Despite some of their disagreements, it would seem that both Pedro and Marta love and care for each other very much. Throughout her time connected to STEM, Marta would think much about her parents when she's not running for her life, and is aware of her father's struggles to rescue her from her plight.

As she does not know that her father was assuming the avatar of The Keeper, she was initially uneasy when she became aware of his presence, and was fearful upon seeing him. This changes later on, however, after Pedro manages to defeat his dark self, almost at the cost of his own life, and disconnects them both safely from the STEM world. In the final shot of the ending sequence, Marta can be seen holding his hand as she watches over him, waiting for him to wake up.

Upon first meeting the Sadist, Marta was reluctant to approach him, but after seeing him plowing through The Haunted, she made contact with the chainsaw man under the assumption that since he was killing monsters, he has to be trustworthy. The Sadist seemed to take an interest in her despite their different personalities, but later scared her away when she tried to take a Memory Token for herself. Despite this, he seemed to hold no grudge against her.

Marta stumbled upon a very lost and very confused Zehn during her journey. Despite the former's intimidating getup and his occasional conversations with his invisible brother, the two got along quite well and walked together for a while before Zehn started acting strange and chasing her around. A frightened Marta then ran away, leaving behind a confused and apologetic Zehn.

Marta knew almost instantly that the then-Haunted Joseph was not to be trusted, and had little to no interaction with him.

Ruvik was once Marta's psychologist despite her father's disapproval of him, and was placed into STEM along with some of his test subjects. 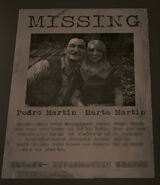 Her and her father's missing person's poster

Marta being held by the Dark Keeper.