The Assignment
The Consequence
The Executioner (mentioned)

"You concern yourself so much with your appearance...but that mind of yours, that's all that matters."
―Marcelo to young Ruben

Marcelo Jimenez is a character and a doctor who appears as a main character in The Evil Within. Charged with caring for his patient Leslie Withers, Dr. Jimenez seems to be more than what he initially appears. He is the brother of Valerio Jimenez, Leslie's original doctor.

Marcelo is a doctor who performed clandestine experiments on the patients of Beacon Mental Hospital, working in collusion with a foreign organization. The organization had him instated as head of the hospital, but he ultimately disappeared under mysterious circumstances

Via flashbacks, it is revealed that Jimenez was once connected with an affluent, land-owning family; during one of his visits, he encountered a then-child Ruben Victoriano, and assured the brilliant boy that his experimentation and research, as well as disgusting and distasteful things are sometimes needed in order to further progress.

As the boy aged, Ruben and Jimenez began to work together; in exchange for funding from the family vaults, Jimenez arranged for test subjects for Ruben to work with, though this relationship is later strained when Ruben/Ruvik discovers Jimenez had begun publishing Ruvik's own research under his name.

Jimenez and Ruben work with MOBIUS at some point.

Jimenez tries to protect Ruben but he eventually finds that MOBIUS have left him a mere brain.

Eventually, MOBIUS betrays an adult Ruvik as they stand on the brink of completing the STEM project, Ruvik's masterpiece; MOBIUS forces an unwilling Ruvik into the role as a primary test subject, with recordings from Ruvik revealing that Jimenez and MOBIUS began testing on Ruvik's own brain. Testing STEM linkage with later test subjects proved fatal or prevented the return of the mind of those involved, save for that of Jimenez's own mentally disturbed patient, Leslie.

Those who were working with STEM began to slip into a coma, and those who attempted to flee would find their efforts mysteriously thwarted, causing Jimenez to begin to suspect Ruvik was not nearly as out of the picture as it was initially assumed he was.

On the night of Beacon Mental Hospital Massacre, Jimenez is one of the few left alive upon Detective Sebastian Castellanos's arrival on the scene.

Dr. Jimenez is first encountered by Joseph Oda, Sebastian's partner, stunned but alive in a security booth located besides a nurse's station. When pressed, the confused doctor can only mutter about his shock over the seemingly impossible return of Ruvik. Presumably ambushed alongside Sebastian during Ruvik's rampage, he is again seen in the ambulance whisking Sebastian and his team (minus Joseph, separated for the time being) alongside his patient Leslie, seemingly trying to comfort the boy.

When the ambulance crashes, Jimenez is forced to face the horrors of the world around them. Seeking out a frightened and fleeing Leslie, Sebastian and Jimenez encounter each other and briefly partner up. Jimenez recalls several areas of the landscape before, eventually even spotting the village in which his brother and Leslie's original doctor, Valerio, once worked at. Thinking Leslie likely would have fled somewhere familiar, the two enter. Within, his brother is seen gruesomely eviscerating a corpse and possibly eating it as well, and Jimenez can only watch as Valerio is killed by Sebastian. Startled by this, Jimenez again states his disbelief at this being the work of Ruvik.

Though once more separated by Sebastian and the others for a long while, Jimenez is again encountered by Sebastian while attempting some sort of experiment on young Leslie, revealing Leslie's connection with Ruvik and how Leslie may well be the only means of escape for them all.

Eventually catching up with and containing Leslie, Jimenez attempts to force Leslie via STEM to release them all, despite the obvious suffering it puts the young boy through.

However, the plan backfires and the Amalgam Alpha is summoned in the chamber by Ruvik, which crushes a babbling Jimenez, his final words an exclamation of finally realizing Ruvik's intentions of escape, that he "wants out".

He is later seen lying dead in one of the STEM baths alongside the corpse of Oscar Connelly, indicating that those who died within STEM died in the real world.

Marcelo Jimenez was an ambitious and power-hungry individual even among the members of MOBIUS. He showed little, if any, concern for the well-being of his patients and co-workers alike, viewing them simply as a means to further his own goals. After discovering Ruvik's brutal experiments and (rather hypocritically) chastising him for it, he was perfectly willing to discredit and betray his former "partner" in order to finish the work on STEM. He is also something of a coward, preferring to run and hide while Sebastian deals with the Haunted. Unfortunately, following a falling-out with MOBIUS, his ambition outweighed his loyalty to the organization, prompting him to activate the STEM early without their permission, unaware this would be his undoing.

Back when he knew Ruvik as a young boy, Jimenez began to take an interest in the boy's talents and intelligence in psychobiology. He worked closely with him, taking him as a protégé under his tutelage, developing a type of close teacher/student relationship. Dr. Jimenez was one of the pivotal people driving him towards the research that would eventually lead up to the STEM system; even adopting his outlook on science as "the means justifying the ends", no matter how gruesome.

He did have some concern and respect for Ruvik to a degree as shown when he was horrified at what they had done to him when integrating his brain into the STEM machine.

He however was not above using him to further his own agenda as he used his feelings for Laura to motivate him or took the credit for his majority of the research.

Marcelo is his doctor, as was his brother Valerio, and both seemed to treat Leslie with disregard, not as a human being but simply as a tool to get in and out of the STEM.

Valerio was Marcelo's brother, and Marcelo himself held a great deal of respect for him, both as family and Leslie's original doctor. Nevertheless, Marcelo showed little (if any) empathy for his brother after Sebastian was forced to kill him.

Though the two did team up with one another, it is unlikely that Marcelo truly saw Sebastian as much more than a tool to utilize in their predicament. After formulating a plan with one another to escape the Sadist in Elk River, they continue on through the village and successfully reunite with Leslie, becoming separated not long after. Whenever Sebastian arrives back at his laboratory, he pays little attention to him, though, focused heavily on his work, though agreeing to escape alongside both him and Leslie. When Sebastian finally raises his gun to him, he seems tired by his constant tirades of confusion, and explains the situation in as simple terms as he can. After his plan to escape backfires and the Amalgam Alpha appears, Sebastian calls out to him to follow, showing that despite his opinion of him as a "jerk", he had hoped to save everyone.

Marcelo's employer and benefactor. He is intimidated by the man. However, that doesn't stop him from doing things behind his back, launching the STEM prototype in Beacon Mental Hospital without his approval. 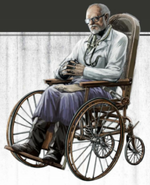 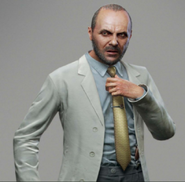