watch 01:48
What is MOBIUS?
Do you like this video?
Play Sound

"Society needs a curator, and Mobius will be just that; ushering in the next step of humanity."
―The Administrator

MOBIUS (stylized MOБ˥US) is a mysterious and antagonistic group who seek to take control of humanity via linking their minds to a machine known as STEM.

MOBIUS is the overarching antagonists of The Evil Within and its expanded universe. They were behind funding of the first STEM system, created by Ruvik, and then used the knowledge gained to create a second system three years later.

MOBIUS's detailed origins is a mystery. The organisation itself is an enigma with an agenda to dominate the world and those living in it. According to Marcelo Jimenez in an audio log, the organization has been in business for more than a century, with unimaginable wealth and vast networks of spies and connections at their beck and call. Their current grand scheme is the total enslavement of the world's population using the STEM system, the designs of which were stolen from the reclusive Ruvik.

However, as powerful as it may be, MOBIUS itself is very secretive in its agenda, usually preferring to influence the world from the shadows instead of overt dominion. Indeed, one does not simply ask to join the enigmatic organisation, but must be invited. They can go to great lengths to erase their own tracks, usually by pulling strings. While there have been exceptions, these individuals were only inducted because of their skills that might prove valuable to the organisation's schemes. To prevent defection, all MOBIUS personnel are required to undergo a procedure that implants a killswitch into their cranium that can be activated by a high-ranking official.

MOBIUS's head of operations is The Administrator, though he himself seems to answer to a higher ruling council only known as "the Superiors".

Before the events of The Evil Within, a young Kidman is given a choice: Join MOBIUS or rot in jail. She chose to join MOBIUS, claiming it wasn't a hard choice for someone out of their teens. Kidman was given an apartment in Krimson City and a job at the KCPD. Kidman was told by MOBIUS that she would have to enter STEM in order to retrieve Leslie, even against his will due to the fact he has compatible brainwaves with Ruvik and could be controlled to power STEM. MOBIUS had some precautions taken so Kidman would not become a Haunted. Kidman was chosen due to the fact she was "disposable" in the eyes of The Administrator.

MOBIUS retrieved the bodies of Marcelo Jimenez and Oscar Connelly and took an unconscious Joseph to an unknown location, leaving Sebastian to think Joseph was dead. They pulled the plug on the Beacon STEM and used it to build a new STEM system.

Three years after the events of the first game, MOBIUS had created a new version of STEM, using the mind of Lily Castellanos as a core. At some point, however, the world inside STEM began to collapse. When the strike team sent to retrieve the Core stopped responding, MOBIUS enlisted the help of Sebastian Castellanos, who had initially assumed his daughter had perished in a house fire prior to the events at Beacon.

In the last chapter of The Evil Within 2, Myra Castellanos replaces Lily Castellanos as the STEM's core. In the real world, Kidman mounts an attack on MOBIUS while preparing to broadcast a signal from Myra that would destroy the Cerebral Chips of every MOBIUS member. Once Sebastian and Lily escape STEM, Myra initiates the signal, and Kidman broadcasts it, killing every member of MOBIUS who has the implant in their brain, ultimately resulting in the organization's complete destruction. 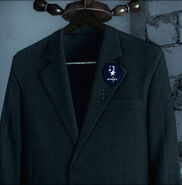 MOBIUS Security Guard #3
Add a photo to this gallery
Retrieved from "https://theevilwithin.fandom.com/wiki/MOBIUS?oldid=28662"
Community content is available under CC-BY-SA unless otherwise noted.