The Evil Within Wiki
Register
Don't have an account?
Sign In
Advertisement
in: Citations needed, Female characters, Characters,
and 2 more

View source
watch 01:41
Who is Lily Castellanos?
Do you like this video?
Play Sound

The Evil Within (mentioned)

Initially little was known about Lily, save that she was the only daughter of Sebastian and Myra. Sebastian wrote in his journals that Lily was raised by her mother full-time for 3 years, before eventually attending preschool on June 16, 2009.

When Lily was five, a house fire broke out at the Castellanos home, resulting in the death of Lily and her babysitter, Juanita Flores. In a newspaper article, it was said that the event happened on February 11, 2012 and that Lily was at the age of five when she died. The incident later led to drive her parents apart.

In The Evil Within 2, it was revealed that Lily did not die. In truth, she'd been abducted by MOBIUS and replaced with the body of a girl of similar physical characteristics. She was taken by as a candidate for becoming a new Core for Mobius' STEM system. It was mentioned by Yukiko Hoffman that Lily was ultimately picked due to her fitting the criteria for their theories that posit the idea that ideal Core candidates must have an unfettered ego; a quality found best in either psychopaths or children.

Through one of their agents, Esmeralda Torres, Lily's kidnapping was staged to look as an accidental death and the reports filed were falsified to cover up the organization's involvement with the incident. As a result, Lily was kept imprisoned by MOBIUS as an asset.

Before the events of the game, Lily Castellanos was inducted as the Core of MOBIUS's new STEM project: an artificial town called Union. It was said that despite her predicament, Lily was treated well and was said to have even been allowed to interact with a number of Mobius agents such as Hoffman, Kidman, and her mother, Myra, on a daily basis.

Inside STEM, Lily was found by her mother and a man named Theodore Wallace. Her mother had come with the intention of freeing her, however Theodore was intending to use her in order to usurp the power of the Core. Myra told Lily to run as she held off Theodore. Soon after, with the Core "removed", the town began to collapse, which gradually got worse over time, with the physical town tearing itself into disparate pieces, and the oblivious townsfolk mutating into horrific creatures known as the Lost. MOBIUS agents were sent into STEM to track her down, but were unsuccessful in their search and became trapped in Union.

In desperation, Mobius reached out to Sebastian Castellanos through their agent, Juli Kidman, in the hopes that he could retrieve Lily, at which point Mobius secretly planned to euthanize Sebastian and return Lily to being the Core of Union. When Sebastian was brought into STEM, he began to search for his daughter in the hopes of rescuing her from the nightmare of Union. During that time, she was running away from Stefano Valentini, who was chasing her under Theodore's orders. She was chased into a gas station at first, and managed to escape through the window. However, she eventually found herself within one of the factories in Union and hid herself underneath a desk; after seeing Stefano seemingly leave, she would attempt to crawl out, only to be captured by him moments later.

After the death of Stefano, Lily screamed upon seeing her father, and proceeds to back away from him, believing him to be dead, as Mobius had misled her on the subject to keep her from growing agitated at her long separation from her father. That was when Myra would come and tell Sebastian that he could not have her, and takes Lily away from him.

After going around Union and slowly seeing it dismantle over a period of time, Sebastian would eventually find out where Lily was: at a reconstruction of their old house at the very lowest level of STEM, referred to as Limbo. He proceeded to get to her as quickly as he could. However, Myra was there, and, having been corrupted by STEM into a deranged, dangerous figure, was intent on killing him to keep Lily safe. This culminated in Myra transforming into a horrific monster called the Matriarch, which Sebastian would reluctantly fight against. After an intense battle, Myra would come to her senses and tell Sebastian that he needed to take Lily and get out of STEM before it was too late.

Lily was in her room, and asked her father if it was really him, and the two would share a heartfelt moment together. After Sebastian exchanged a few final words with Myra, who needed to stay behind, even though it would cost her her life, the rest of Union finally began to collapse, with Sebastian taking Lily to his Room, going through the mirror and finally escaping STEM once and for all.

Once in the real world, the doors to Lily's pod were opened and she was woken up by Sebastian, holding her in his arms. Whether she remembers anything of her ordeal within STEM is unclear, as her first words to him were simply that she had been having the worst nightmare ever.

In a post-credits sequence, Lily is seen with Sebastian and Kidman, being given a present from the former, and rides off with her father to a new life together.

In The Evil Within 2, Theodore Wallace uses an apparition of Lily to both guide and torment Sebastian. It was first hinted at in the game's Announce Trailer and appears to look like a dark Lily sitting cross-legged on the ground while listening to Father Theodore's sermon. Upon Sebastian's approach, she bursts into flames.

In the game, its presence began with a warning burned onto a wall saying "Don't Go" in the sidequest, Rogue Signal, warning him away from his first direct encounter with the murderous Stefano. Using Sebastian's memory of Lily's writing at the back their family photo, Theodore made the warning to look like it was from Lily.[citation needed]

Later, the same kind of burnt messages appear all over the walls, along with Lily's voice, accusing Sebastian and reminding him of his failings.

In Theodore Wallace's Domain, Sebastian encounters an apparition of Lily. She walks over to Sebastian, her feet leaving trails of fire. When she gets close enough, she clings onto him, accusing him further of not saving her. She bursts into flames, burning Sebastian along with her.

Sebastian once again confronts Lily's apparition later, when he's reached the top of Theodore's Stronghold. Coming to terms with himself and the events that had happened, Sebastian welcomes the apparition with open arms and embraces it. Free of feelings of guilt, he is able to make peace with it. The apparition then finally slowly dissipates into light and fades away harmlessly.

In The Evil Within 2, she frequently appears to be in white and pink pajamas within Union. When she is finally freed from the Core of the STEM system, Lily wears a dark red shirt and navy pants, along with her black hair being slightly longer; evidence that perhaps she continued to mature during her time as the Core. During the epilogue of the game, Lily was seen wearing a light pink shirt with butterfly designs on it, a pink hoodie, short magenta capris, and pink and white shoes.

Lily was described as a sweet, innocent girl for someone of her age. She was described by Sebastian as someone who was both observant and empathetic towards others, capable of understanding how a person feels just by looking at them. She was both smart and creative, scoring very high on standardized tests and showing some talent with drawing.

Although Lily is not seen in person in the first game, Sebastian's boss wall has a drawing of her. 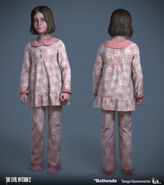 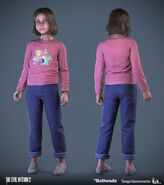 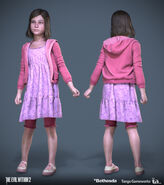 Photographic slide of Lily reading a book with her doll, full color

Lily as she appears in The Evil Within 2.

Lily Apparition as seen in the trailer

Lily's file can be found in Hoffman's safe room

Lily refuses to believe that her father is alive, despite standing front of her

Lily get a present from Kidman, with Sebastian

Lily during pre-credit
Community content is available under CC-BY-SA unless otherwise noted.
Advertisement