The Evil Within Wiki
Register
Don't have an account?
Sign In
Advertisement
in: Characters, Male characters, Deceased,
and 3 more

"You ask me, there’s a thin line between “brave” and “foolish”"
―Liam O’Neal

Liam O'Neal is a MOBIUS Technician and member of Alpha Team. He is a supporting character in The Evil Within 2 and is one of the longest surviving members of his team, while serving as a major ally to Sebastian Castellanos.

Liam O'Neal is a Caucasian American in his 30's. He has a shaved head, light colored eyes, wears wire framed glasses, and has a tactical bulletproof vest with the MOBIUS name on the shoulder.

After being brainwashed, O'Neal swaps his MOBIUS uniform for a Harbinger outfit and mask. His facial features seems to have been severely burned on the left and backside with his left eye being visibly damaged.

O'Neal initially comes across as weak-willed, cowardly and selfish. He claims the security member who died protecting him when Sebastian first saw him was "just doing his job", and refuses to aid Sebastian beyond giving him advice through the radio.

That said, O'Neal is not incapable of gratitude and selflessness. If Sebastian tracks down the remnants of his team at his behest, O'Neal will have some Crafting parts made for him as payment. When he became aware of a deadly gas leak in the Marrow tunnels, O'Neal seemingly went out of his way to scavenge a fresh gas mask to lend Sebastian instead of just taking one off of a corpse, hinting that despite his outward selfishness and cynicism, he really does have a heart of gold.

He appears to care deeply for Yukiko Hoffman, resisting Father Theodore's influence when turned into a Harbinger to argue that she was harmless, before giving into his will. He thanks Sebastian for freeing him and saving Yukiko before dying.

Around 24 hours since the Core had gone missing inside of STEM, the Union operatives filed a report to MOBIUS headquarters before losing contact with the outside world. In response to this, MOBIUS sent Alpha Team into the STEM with the plan to meet up with the security forces there, and assist with locating and restoring the Core.

However, upon arriving in Union, the team realised that the situation was far worse than any of them could have imagined, as not only had a large percentage of the population mutated into murderous creatures, but the world itself had literally began breaking at the seams. The team was attacked and became separated, leaving O'Neal and Baker on their own. Despite O'Neal suggesting they wait it out for extraction and "leave the dangerous work for someone else", Baker went off on his own to investigate a large signal caught on the communicators.

Despite efforts made using the Stable Field Emitter to restore the environment, it failed as the machine wasn't working correctly.

Sebastian Castellanos first encounters O'Neal in Chapter 3 at the Union Visitors Center area, at which it had already been a week since the latter and his team's arrival.

O'Neal is witnessed running for a safe house, under the protection of a single member of Union security, from a horde of the chasing Lost. The guard is ultimately killed when he fends off a couple of the Lost from closing in on O'Neal and is attacked from behind, allowing O'Neal to get to safety.

When Sebastion arrives at the safe house, O’Neal is initially hostile and skeptical towards Sebastian. After an initial stand off, he begrudgingly offers Sebastian the use of his Safe House, while also requesting the detective to track down the remnants of his team and helpfully point out the location of the Warden crossbow if pressed.

From then on, O'Neal serves as Sebastian's technical consultant, informing him of the overreaching Marrow tunnels and various Safe house locations around the Residential Area of Union. If Sebastian checks on him every now and then, O'Neal will usually have scrounged together some mission-critical gear to aid him on his trek. He will stay in his initial Safe house until Chapter 11.

After making contact with agent Esmeralda Torres, Sebastian attempts to contact O'Neal but could not get through to him. Going through the Marrow, Sebastian discovers that Theodore Wallace had somehow inflitrated the facility and began to hunt down the remaining Mobius operatives. Upon arriving at Yukiko Hoffman's Safe house, it becomes apparent that something's amiss, since O'Neal has somehow gotten access to the Restricted Area of the Marrow despite his claims of not leaving his safe house until help arrived. Fighting his way through the labs, Sebastian finally reaches Hoffman and O'Neal, who by this point have been brainwashed by Theodore Wallace and transformed into a Harbinger. The converted agent promptly engages Sebastian, but was ultimately defeated.

Briefly regaining his mental faculties, the dying O'Neal apologizes to Sebastian and implores him to destroy the jammer he helped make so that the latter can track down Theodore and put a stop to his madness. He then expires shortly afterwards.

During his boss fight, O'Neal exhibits the usual behavior pattern of Harbingers. He will either remain at range and hose the player down with his flamethrower, or charge up close for a bash attack. Both of these attacks deal considerable damage on higher difficulties and should be avoided at all costs.

O'Neal's Harbinger form has a significant amount of hitpoints, but is vulnerable to headshots and can be stunned by blowing out the fuel tank on his back. Getting the jump on O'Neal with stealth attacks also works, though this is easier said than done due to his speed. Six stealth attacks should be enough to take him down if they can be managed.

Defeating O'Neal nets the player his broken Flamethrower, which can be repaired to full working order with additional fuel tanks looted off of slain Harbingers.

Speaking to O'Neal at his safe house about the possibility of supplies allows Sebastian access to a side quest, which involves investigating Resonance Points left by MOBIUS security members who were searching for weapon caches.

Sebastian holding him at gunpoint. 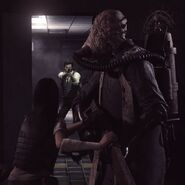 Yukiko, Sebastian and Liam O'Neal (as an Harbinger).

Liam finishes off Sebastian with his Flamethrower.

The Evil Within 2 - Breaking the Fourth Wall
Breaking the fourth wall with O'Neal.
Community content is available under CC-BY-SA unless otherwise noted.
Advertisement