Start a Wiki
watch 01:56
Who is Laura Victoriano?
Do you like this video?

"Hmph. I didn't hear anything."
―A villager setting the barn on fire, purposefully ignoring the sounds inside

Laura Victoriano is a minor character and an antagonist who appears in The Evil Within. She was Ruvik's older sister, who was grievously injured in a barn fire and subsequently died prior to the events of the game.

As a child, Laura was very close to her little brother Ruben. The two often used to play together. Though rarely mentioned in the storyline, she is mentioned by Ruvik who, for example, comments that her favorite piece of clothing was a red dress.

In the model viewer, it is stated she was the only person who understood her brother.

After the siblings' wealthy parents bought a new land and farm, Ruvik and Laura were playing in a barn in the newly bought land. Two of the land's previous occupants are shown approaching the barn discussing how they need to show the Victorianos who really owns the land. The two drench the outside of the barn with gasoline. Though one of them notes hearing children inside, the other states there is nothing, and throw their torches to light the barn on fire.

Panicking, the siblings find a small window in the top part of the barn. Laura helps her brother up the window, both of them burning at this time. Ruvik falls out the window in flames, escaping the fire despite being heavily disfigured by the burns. Laura, however, is unable to escape, and is left to die inside the barn, screaming as she burns alive.

One of the Krimson Post's articles located within the game says that Laura did not die from the barn fire, but was badly wounded and left in a vegetative state. However, she eventually passed away.

Being told by their father that Laura did not survive the accident further worsened Ruvik's mental state. As described in notes left in the Victoriano mansion, it is suggested that in the following years after her death, Ruvik had seen visions of her.

In the events of the game, a distorted version of her can be encountered born from Ruvik's memories of her and his vengeance.

Marcelo Jimenez notes that Ruvik's motivation for the creation of STEM was inspired by his love for Laura. Ruvik also said that he wanted her to see the real him and not his burnt body. It seems that if Mobius hadn't gotten involved and eventually took over, Ruvik would've wanted to use his memories of her within STEM, to bring her out and be with her. That, or he would visit and or stay within STEM to be with her. Whether it be actually bringing her into existence without problems, or finding a host to bring her back in, similarly to how he needed to leave through Leslie's body.

Inside the world of Ruvik's mind, there is a creature that bares resemblance to a warped version of Laura, having very similar long black hair, her body is twisted and warped with four arms each one with razor sharp claws. The creature will pursue Sebastian at various points throughout the game. The creature is weak against fire, and screams in agony, similarly to when Laura was trapped in the burning barn.

The creature was born from Ruvik's memory of his sister, and his desire for vengeance.

There's an Easter Egg of Laura in the first DLC. Before you head into the area where you have to head into Biometrics. There are two doors that are broken and continue to open and shut. If you shine your flashlight in there, you'll see Laura standing there, in the long dark hall way. She'll laugh very creepily while standing there in one place and just stare at the ground with her head facing downwards. And if you wait long enough, she teleport closer and closer to the door until she's eventually right there behind the door with her head up, staring right at Juli.

Laura as the Merchant

In the Artbook it states that instead of the Upgrade Chair, they planned on having a merchant who started out as a woman (to replace Tatiana). The woman was never said to be a grown up Laura, but we can assume that it is due to her almost identically long black hair and red clothing.

Laura was Ruvik's sister and the only person who understood him. They clearly had a very close relationship and cared for each other. After the fire and Ruvik was told she was dead, he became depressed and finally snapped. He even went as far as to killing his parents, blaming them for everything that happened to him. It's unknown how she felt after the fire during the Vegetative state but it can be assumed she wished to be with him again.

Their relationship was never put into detail but we can infer that they were on good terms. Beatriz passed on a lot of traits to her daughter, such as her long black hair and kindness.

Although never seen interacting we can assume they had a neutral relationship, unlike Ruvik. Ernesto knew of his children's closeness, which caused strains in his relationship with Ruvik. It may also be implied that she may have been a safe border between her brother and father. 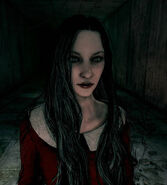 The Newspaper that confirms that she survived the fire

Add a photo to this gallery
Retrieved from "https://theevilwithin.fandom.com/wiki/Laura_Victoriano?oldid=27889"
Community content is available under CC-BY-SA unless otherwise noted.