View source
watch 01:38
What is the Laura Creature?
Do you like this video?
Play Sound

"Deep down I knew she was only an apparition, but I would regain my face, recover what was taken from me, restore her. My beloved sister, Laura."
―Ruvik vowing to make things the way they used to be

A creature born from the memory of Laura's tragic death and Ruvik's own vengeance. She is nearly immune to bullets but reacts violently to open flame, a reference to the barn-house fire which heavily injured Laura and placed her in a vegetative state that led to her eventual death. Likely as a result of the fire, Laura's reincarnated form possesses discolored and patchy mottled skin.

Her constant screaming is possibly an effect of Ruvik's last memory of Laura screaming in anguish as she was being burned.

Sebastian Castellanos first encounters Laura at the end of Chapter 4 in a morgue-like room at the end of a short hall. Upon Sebastian nearing the pile of corpses in the back end of the room, Laura suddenly bursts out of the dead bodies while letting out a blood-curdling scream. Sensing that the creature in front of him is quite a challenging foe, the detective decides to run for his life.

The chase is far from over, however, as Laura once again shows up at the end of the very next chapter, where she must be fought inside a large incinerator room. Using the burners mounted in the floor, Sebastian is able to incapacitate the specter after burning her three times.

Laura will be met later on in the game once again, in Chapter 10, before the Amalgam Alpha teleports Sebastian to a different zone. She is first seen crawling on a large wire tube, where she will eventually break through after Sebastian opens a door. The detective must then make his way to the elevator at the end of the area. If Laura is not defeated before entering the elevator, she will grab Sebastian through the chain doors as it descends, causing it to sever two of her arms.

Laura then vanishes for the rest of the game. Given that Ruvik is either dead or disconnected from STEM at the game's conclusion, it is safe to assume that Laura perished along with the rest of the creatures inhabiting the zone.

Laura briefly returns in The Evil Within 2. If Sebastian triggers the memory in a house on the north end of Cedar Street in the Residential Area, Sebastian will be transported to Beacon, where he will enter a room and see an image of himself, dressed as he was during the Beacon incident, slumped over in a chair in a pool of blood. Reaching out to inspect his own body, Laura's clawed hands will reach out from the blood and drag him into said pool. He will then wake up in the house the memory started in. The words "NEVER FORGET" as well as the Beacon symbol will be burned into the wall.

During the boss fight with Theodore Wallace, who uses Sebastian's memories of STEM to torment him. After Sebastian's defeat of The Sadist and The Keeper, Laura emerges from the latter's fallen head safe as the setting changes to a room similar to the incinerator room where she was fought in the last game. Sebastian avoids Laura long enough to turn two valves and use a lever to ignite an overhead incinerator in the center of the room, defeating his memory of Laura and erasing her influences over him forever. 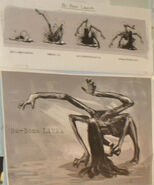 The Laura Creature as depicted in the first trailer.

Sebastian's face caved in by the beast. 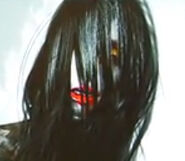