Elinor Gunn
The Lament is a creature encountered in Union during the events of The Evil Within 2.

The Lament is among the most repugnantly deformed creatures in the game. It appears to have been formed from at least two female hosts, possibly with body parts from others attached to the creature's lumpy torso, giving it multiple bony arms to grab its victims with. Some smaller ones are instead fused into the flesh on its naked body.

The skin of its body is horridly malformed, stretching across it into twisted positions. Its pale head, often cocked to the side slightly, features a large, gaping maw and two papery, bloodshot eyes dripping an acidic fluid down its face. The Lament is almost completely bald, save for several extremely long black strands of hair, which are melded into its body in some places.

Laments hobble around on two long, bony legs that are narrowly capable of supporting the weight of their twitchy, spasming bodies. They can easily be detected by the clouds of green toxic mist emanating from their bodies, as well as the loud, hiccup-like gasps they make, almost throwing their voice, making it difficult to hone in on their location if they are above or below Sebastian. Startlingly, the Lament will burst into manic yelping once it has spotted Sebastian, though if he hides well enough, the creature will come back to wailing after a short bit of searching around.

They are first seen in the Residential District of Union on rare occasions. One is always set to guard the Broken Sniper Rifle in a shed, and another along the foot path towards the diner on top of the hill where Lily's signal leads. They can usually be found in forested areas or parking lots, though these encounters are rare.

Another Lament is set to prowl about the sewers as Sebastian travels through The Marrow, and another is seen wandering around the bottom floor of the laboratories after Sebastian obtains a Unity Cerebral Chip.

Laments are among the most dangerous standard opponents faced in the game, and have the highest perception of any standard enemy, able to spot Sebastian directly behind them with a slight turn of the head. The moment a Lament spots Sebastian it will whirl around and emit a shrill, deafening screech, which will spawn anywhere between two to three Losts to aid it in combat, in addition to draining his stamina and slowing Sebastian down, as he has to cover his ears.

At first, they will begin hobbling awkwardly towards Sebastian, spewing massive balls of acid at him with great accuracy, exploding on impact, knocking Sebastian down into the collective acid puddle created by the spit. Once a Lament has taken enough damage, it may randomly begin to close in on Sebastian with a rapid and often unavoidable dash, grabs him with its bony arms and proceeds to vomit acid into his face for nearly 8 seconds, searing his skin and killing him instantly.

If Sebastian is carrying a bottle, and has the corresponding perk, he can escape this attack by hurling it into the Lament's face, causing it to drop him. Like many other enemies in the game, Laments can be Sneak Attacked and Predated on and Ambushed, though such maneuvers are quite difficult to pull off due to the creature's health and high perception. A Lament requires two successful Sneak/Predator/Ambush attacks to bring down from full health.

The Sawed-off Shotgun is a viable option during the early game, though one must be careful not to get too close or the Lament will grab them for an instant kill. Otherwise, Laments are slow and easily dispatched from range with any weapon despite their sizable HP pool. 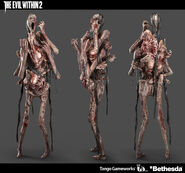