The Evil Within
The Assignment
The Consequence
The Executioner
The Evil Within 2 (Mentioned)
The Interlude
In the world of The Evil Within, the Krimson City Police Department or KCPD for short is the chief law enforcement agency of the eponymous establishment and the surrounding areas.

The KCPD operates like any other real-world police organization, being headed by an unseen Captain that presumably reports to a Commissioner or district attorney, and a network of dispatch officers that relay orders from the precinct to patrolmen and other law enforcers on the field. Although the city itself isn't all that big, the Police Department's jurisdiction apparently extends out to the outlying areas, as various traces and mentions of investigators sent to study cases of missing persons are not uncommon. It also possesses a SWAT team, as many of The Haunted encountered throughout the city ruins wear riot armor and are armed with police-issue weapons.

The department itself has a dedicated Crime division staffed by several detectives, chief among them used to be Sebastian Castellanos until his discharge. It is currently unknown if there are more than one team of detectives at any one time, as every other member of the division were subordinates of Sebastian himself.

It is headquartered in a large building in downtown Krimson City.

Throughout the course of the first game, several characters from the precinct can be met and interacted with. While most of the KCPD's ranks are formed from local recruits, there was at least one Canadian member. 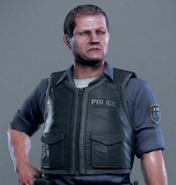