"You did what it took to survive, to come home to us, but you left part of yourself over there, back with all those other dead men!"
―Jack's wife

Jack is a supporting character in the Evil Within comics. He is an ex-soldier who was traumatized by his experiences, and now finds himself fighting for his life once again in the hellish nightmare of STEM.

While much of Jack's early childhood remains a mystery, he would seem to have led a fairly happy and unassuming life prior to 2009, getting married and having a daughter with his wife.

Circa 2009, possibly prior, Jack joined the United States military and was shipped overseas on a rotation to a Middle Eastern country, possibly Afghanistan. It wasn't until then that Jack's life would truly begin to spiral downhill.

An intense humvee battle near a canyon resulted in Jack and all in company being captured and bound up. Jack was forced to watch each of his friends get stabbed through the throat, one by one, and was helpless to do anything about it. One of the terrorists even uttered coldly "do not look for mercy, you came bringing death".

At some point, Jack escaped his bindings; wounded, and was forced to hide in a massive pile of his friends' corpses, and began helplessly praying for his life that he not be seen by them. An attack helicopter arrives just in time and guns down the terrorists. Jack stumbled out from the pile of bodies, covered in his friends' blood, still praying for help as the rescue team found him.

Jack returned home, and sank into a deep depression over the next three years, in addition to his wife constantly yelling at him, presumably leaving him eventually (judging by the smashed family portrait), believing that he was "dead inside", and could no longer be the husband or father that they needed.

After taking a nap during his free time one day, Jack mysteriously wakes up in the "crazy" town of Silver River. Eventually running into fellow lost soul Ruth Shaw, the two travel the desolate city for some time, seeing some "messed up shit" and battling Haunted along the way, which they initially mistook for travellers.

Soon, the pair encounter another duo, Dana Robinson and Paul Carey, interrupting their argument regarding Dana's lost friend. The two call out to them, weapons readied, and they four introduce themselves to one another. Jack is initially suspicious of the travellers, questioning as to whether or not they're real. Ruth quickly dismisses him, and the four begin to introduce themselves to one another. Jack isn't overly revealing about his past, telling them that he was a soldier shipped overseas during a rotation, later returning home after being apparently wounded, despite not appearing particularly injured at the time, though it may have been internal.

With Ruth as their guide, the group roams the dismal streets of the once-fruitful city, Dana experiencing firsthand the affairs surrounding Ruth's grim upbringing. Meanwhile, Jack scopes out a strange building in the distance, beconing them with it's bright rays. This structure would turn out to be St. Judes, the high school Ruth spent her teenage years at.

As they draw nearer, the group begings feeling uneasy upon approach of it's nearly tangible aura, Jack especially. Passing by the blood spattered about in front of the entryway, they continue straight down the main hallway, following Ruth's directions. Though offput by the disturbing childrens drawings hung throughout, Jack remains determined to keep everyone's mind focused, and stresses that they stick together.

Their attention diverted, the group enters the bloody room up the stairs, and Laura appears, chasing them back out into the hallway. After Dana stops them from running into the acid sprinklers, Jack ushers them back around a corner and up an alternate flight of stairs as Laura breaks free. When they become trapped in the hallway with the headed grid sliding towards them, Jack is quick to instruct Paul, the closest to the locked door, to kick it open. Jack barely makes it through as the grid passes by, dipping his head back out quickly to shout "burn in hell!", beliving Laura to have been killed or incapacitated.

Ignoring the other locked doors, the group runs straight down the final hall, Jack bursting through the exit, momentarily relieved, before they realize that the roof exit connected to the top of a transmission tower, which they'll have to cross. Paul continues griping, and Jack snaps at him, proceeding to take the lead and guide them across the gap. The lattice begins to collapse, and the tower tilts towards the cliffside adjacent to them. Laura reappears and kills Ruth, the tower beginning to collapse at a heavier rate now. During the final stretch, the tower is set ablaze.

Jack and the other survivors wake up inside a dark, blood-filled dungeon, and he proceeds to help Dana up, explaining that as the pylon broke loose it hinged like a lever and threw them there. Paul explores ahead and discovers a latter and hatch leading to a floor above.

After they head up, they traverse the dank corridors of the lair, Dana and Jack beginning to bond even more heavily. After some point, they pull open a curtain, leading them to a tiled room filled with bodies hanging from the ceiling, much to their horror. Dana finds a crumpled uniform on ground in the room and examines it, experiencing another headache. Dana is forced to watch on through Jack's dark past, and her sympathy for him grows even more. When she comes to, Jack walks over and tells her that he recognizes the uniforms as those of friends from his old unit in the army. Jack gazes around in horror at the hanging bodies once more, conviced that they are in fact the hanging bodies of his friends. He hangs his head in sorrow as Dana consoles him.

Loud footsteps are suddenly heard and Paul begins panicking again. Jack instructs them all to hide as a nightmarish figure enters the room growling and pulls back the curtain; a serial killer known as the Sadist. He yanks a corpse down from the ceiling and drags it back with him the way he came. Paul continues to freak out as Dana proposes they silently follow him to the exit, Jack agreeing, They proceed to do so, Dana convincing Paul to stick with them. They follow the Sadist to his lair and watch on in disgust as he hacks into it with his cleaver. Jack observes the tapestries around them, noticing distinct designs in them. He comes to the horrific realization that they are the flesh of his friends in service, and the tapesty features the tattoos they used to have. Jack asks Dana how this could even be possible, though Paul interrupts the two impatiently, asking when they're going to be done, anxious to pass through the doorway during their opportunity,

As they head down the passageway, Jack triggers an unnoticed tripwire, one of the Sadist's classic traps, and he stops what he's doing, furious, and graps his chainsaw, heading right after them. The three sprint for their lives down the hall, Jack quickly blocking the doorway. He tells Dana and Paul to go on while he thinks of a way to hold the Sadist off, Dana refusing, and helping him to block it shut with a desk and a filing cabinet. They continue sprinting, Paul nearly running face-first into a wall of razor wire, Dana keenly noticeing and stopping him. The Saidst begins sawing through the barrier, the trio quickly trying to come up with a way through. Dana grabs a steel pipe and sternly asks for help, Paul doing nothing but gawk back to the doorway in fear. Jack quickly lends Dana and hand prying the razor wire apart with the pipe, just as the Sadist erupts through the door violently. Dana heads under, continuing to hold it open as Paul passes through right after, barely making it. The razor wire slices through the pipe, trapping Jack on the other side as the Sadist charges towards him. Him and Dana share a final goodbye before she and Paul head down the tunnel to the subway transit to Echo Falls. Jack readies himself with the two jagged pieces of pipe, telling himself that he should have done this a long time ago, referring to when he chose to hide in the bodies of his friends rather than to perish alongside them.

It is possible that Jack survived the battle, as no direct confirmation is given, and the Sadist has certainly been taken down with less, as per Sebastian Castellanos.

Though initially suspicious of her, Jack quickly warmed up to Dana, and the two became good friends over the course of their journey. Jack greatly appreciated her keen eyes and resourcefulness, in addition to her willingness to participate and her welcome sense of humor. When Dana showed empathy and care for Jack's struggles, he reciprocated them back towards her, always calming her thoughts and steadying her breathing during panic attacks, and staying by her side during hard times. As their group grew smaller, Jack soon felt that Dana was the only person he should discuss plans with. In the end, Jack gave his life to save hers. When bidding farewell, a hysterical Dana did not want to leave Jack behind.

The two were on good terms. While the full extent of what the two did together during their travels alone remains unknown, Jack never questions Ruth's judgement, and follows her guidance throughout town, showing that he trusted her. When the group enters St. Judes high school, Jack is highly disturbed by the childrens artwork, and seemingly isn't put at ease when Ruth tells him it wasn't always like that. When Ruth dies, Jack is unwavering in his goal to get everybody across the top of the tower safely, as a hardened soldier would be. Later, when Dana mentions Ruth again, he is noticeably saddened, showing that he cared.

Jack and Paul did not like each other. Paul's constant complaining bothered Jack to the point that he eventually snapped at him, saying that if he hated being in their group so much, he was more than welcome to leave. Paul's lack of connection towards any of the other travellers conflicted heavily with Jack's outlooks on sticking by each other's side and keeping clear-headed. When trapped in the Sadist's dungeon, Jack calmly suggested that they think through their predicament piece-by-piece, noting that Paul's angry outbursts were particularly unhelpful. In the end, Paul abandoned Jack with little hesitation, even eagerness, looking away as Dana said her final goodbye, and retorting "watch me" when Dana said they couldn't leave him behind. 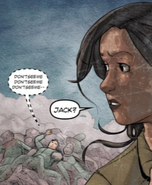 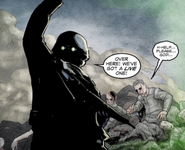 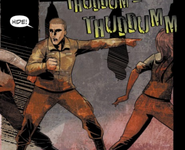 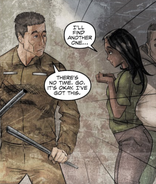 Jack facing off against the Sadist 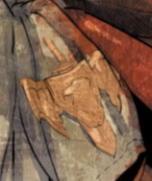