"I'm always ready to dive into the grotesque."
―Ikumi Nakamura

On September 4, 2019, Nakamura departed Tango Gameworks for reasons unknown, after 9 years of service, thus leaving GhostWire Tokyo as well as any other potential Evil Within title without a lead designer.

As a child, Nakamura would watch Clive Barker's Hellraiser on an almost daily basis. The nightmarish distinction of this from the zombie flicks she had watched prior left a lasting impression on her for the rest of her life, and it was from these places in her mind that characters such as The Keeper would later be born.

In 2004, Ikumi Nakamura began working for Capcom, her first game being Ōkami, which she designed backgrounds for.

Nakamura later left and joined Platinum Games in 2007, where she would go on to design concept art for Bayonetta.

Thereafter, Ikumi Nakamura joined Tango Gameworks, where she would become Shinji Mikami's apprentice and the lead concept artist for The Evil Within.

As the lead concept artist for The Evil Within, Ikumi was responsible for a vast multitude of tasks, including the design of environments, which she specialized in prior, as well as character and creature design.

Among large contributions to others, Nakamura was most responsible for the sole creation of:

Joseph, Laura, Tatiana and The Keeper are Nakamura's favorites. The Keeper was initially designed to coincide with a "gift" that Ruvik was going to send Sebastian in a safe. Nakamura was quite disappointed to discover the teleportation ability given to The Keeper after he tears his head off, believing that it took away from the real, tangible nature that he was originally created upon, which distinguished him from many of the other monsters found throughout the world. Shinji Mikami apoligized for this, but believed that the idea of blocking a monster out and it still managing to find it's way through indestructable barriers too unique to pass up.

Nakamura finds Laura disturbing to even think about, and purposefully gave hints to her past through her appearance (naked with full-body keloid scars but still wearing shoes), since it isn't touched up on heavily in the plot. Shinji Mikami immediately approved her design for Laura. Ikumi Nakamura designed both Laura and The Keeper in a way that restricted visibility to facial features, which leaves the player wondering things such as "what is this being thinking?" or "can it even speak?". Since the eyes are often believed to be the gateway to the soul, the lack of any eyes invokes an uneasy feeling.

Nakamura completely designed Joseph from the ground up when told to simply "give Sebastian a buddy", first deciding on a partial Asian, which would make an interesting contrast with Sebastian's character, Mikami agreeing. Designs of characters from various Asian countries were tried, but Nakamura eventually settled on a partially Japanese ancestry. His origin of Toronto was chosen because that's where Nakamura's old english teacher was from. She gave him an American hairstyle, which she felt contrasted nicely with his graceful facial features. Outwardly, he can appear expressionless, which portrays him as intellectual. On the job, he maintains a cool and collected demeanor, but is doting on his partner and cares deeply for him, the two soon becoming best friends.

Nakamura also explains that Joseph is a modern-day descendant of ninjas from New Gotanda City. Nakamura also proposed that a "cliche stealth-based action DLC" where he must retrieve legendary glasses from an organization called "目美薄" be made. When proposed, only a small number of staff members got excited about it, and so it never came to be. Despite what she wrote in the art book, Nakamura suspects in hind sight she was the only one who really wanted a Joseph DLC. Joseph was also originally planned to die around the middle of the game, but Nakamura confronted Mikami about this on the roof of the headquarters, telling him that if they killed Joseph, she'd "resent him forever". Mikami described Nakamura's expression as "looking like she was about to cut him in half", and so the plans were changed.

Nakamura explains that since Joseph was her first design for the game, he subconsciously became the most important to her. Her favorite design for him was the one where he had a large gauze patch over his left eye, since she wanted him to look "all beat up".

When designing Leslie, there was much confusion regarding his age, as rating problems tend to arise when children are included in horror games. Nakamura was initially instructed to create a 15 year old boy who "didn't look that much like a 15 year old". Nakamura struggled greatly with his design, trying constantly to get his clothes right, but never seeming satisfied. She eventually settled on a Beacon uniform, since one of the game's themes was mental illness. Then, struggling with Leslie's face, she had to design a child character who wasn't a child.

Nakamura tried negotiating an idea of a character with a more mature face, which was shot down. One of her designs included "the face of the kind of boy who'd steal a bike". Eventually she came up with the idea for a character with the proportions of a child, but the face of an adult, which caused fellow staff members to complain that "[they] didn't wanna chase somebody like this and [they] didn't want to save him!".

Nakamura then decided on a more cute and feminine design, which the line of "If a leaf falls on me, I will surely die" repeating in her mind as she drew him out, integrating the phrase into his appearance. He was rather frail and albino-like, with capillaries showing through the skin around his eyes. According to Nakamura, he ran into a wall and gave himself a nosebleed, then wiped it off with his sleeve, staining his mouth red. When he smiled, he had missing teeth. Nakamura asked for a redo after determining that the first integration of his 3D model wasn't "cute". After giving him "cosmetic surgery", she was satisfied with Leslie, though quite confused at why the art book displayed his age as "25", when she had been told he was "15".

Tatiana Gutierrez' "langorous" character seemed to have worn on the other staff, and she was initially cut from the game at some point during development. Not wanting to see her go, Nakamura asked Mikami if there was any way she could still be in the game, and eventually she was re-added.

Nakamura was originally to direct The Evil Within 2 before Mikami decided to give John Johanas the role.

Nakamura instead reprises her role as lead concept artist.

Nakamura poking a co-worker with a Gears of War Lancer

Ikumi with a shotgun 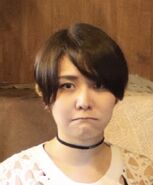