Christina Jacquelyne Calph
Hysterics are a dangerous variant of The Lost encountered by Sebastian Castellanos in The Evil Within 2.

Hysterics are easily distinguishable from a regular Lost by the white one-piece dresses they wear, as well as their distinct, strained croaking. Their bloodied and oversized hands bear long, sharp nails, and their skin is unnaturally pale, lacking any boils or veins present in the Lost.

Hysterics are very thin, with sunken skin around the neck and collarbones and correspondingly skinny limbs. What's less observable, however is their reinforced skull dome, giving them a slightly bulged cranium. Hysterics have rather large mouths filled with gritted, yellow teeth. Their hair is scraggly and white, leaving much of their head bald. In addition to this, their left eyes are located further back and up their heads than their right eyes.

Typically found roaming in The Marrow, though occasionally encountered in back streets or idling in bushes, Hysterics tend to keep to themselves, making combat with them easier due to their usual distance from large mobs or other Hysterics. They are however tough, for a stealth attack with the knife takes two attempts due to their reinforced craniums.

Hysterics always wield knives, which they will violently slash at Sebastian and dealing massive damage, so long as he is within close distance. During combat, Hysterics will constantly follow after Sebastian, while switching between a shuffle and a burst of speed every so often, allowing them to catch up to him should he slow down. They can't take very many more gunshots that a Lost would, however. When shot, Hysterics will initiate a counter animation where they will immediately charge towards Sebastian to slash him.

Hysterics are resistant to headshots and melee attacks aimed at their faces, which somewhat enrage them instead of killing them when struck against one. They are also resistant to Sneak and Predator kills and can survive one such hit before becoming instantly alerted. A second attempt or a successful Ambush will kill them, however. 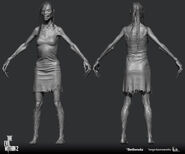