The Evil Within
The Consequence

The Consequence
The Heresy is an enemy encountered in The Evil Within.

The Heresy was originally created as just another mentally-enslaved minion of Ruvik, likely a Haunted, before the creature's host was consumed completely by STEM and became rampant. As it ran amok, the creature started assimilating the minds of whatever being stood in its way and mutated dramatically to become what it was when encountered by Sebastian Castellanos and company on the Krimson Expressway.

The Heresy is a massive creature with an enormous blob of flesh serving as its main body. It has three pairs of spindly sharp legs that lets it move around like a spider, while also serving as its primary means of defense.

Smack-dab in the middle of its front side is the creature's misshapen face, along with the remnants of whatever poor souls it had assimilated into its mass. The head appears almost humanoid, with swollen eyes and a nose, and multiple black tubes containing an unspecified fluid connects the Heresy's face to its rear end. The creature's body is swollen with hideous lesions and boils, and an orifice located below its torso allows it to spit out maggot-like spawns to attack prey with.

The Heresy is encountered by Sebastian Castellanos, Joseph Oda and Juli Kidman during Chapter 12: The Ride, as the trio tries to make their way out of the collapsing city. It ambushes their commandeered bus and chases them throughout the city, occasionally retreating out of sight only to suddenly appear and resumes pursuit. After attacking the party for the third time, the creature rears its legs in an attempt to crush the bus, but is killed when Juli Kidman drives the vehicle under a low pass, smashing the creature into solid concrete and ending its life.

The Heresy itself is unkillable with just firearms alone, but can be fought off every time it latches onto the bus.

The Heresy in the model viewer 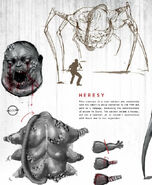