View source
watch 01:43
Who is the Guardian?
Do you like this video?
Play Sound

Chapter 7: Lust for Art
The Guardian is an enemy encountered in The Evil Within 2.

The Guardian is a towering abomination that stands at least twice the height of Sebastian Castellanos, and is comprised of the mutilated remains of various women murdered by Stefano Valentini, mostly their heads, each one wearing a different expression, with the central one facing forward and sporting a wide, maniacal grin. Its body is almost tree-like, with a large top half connected to its pelvis via a large spine, though how the creature maintains balance when it runs is not explained. The Guardian's right arm is equipped with a large buzzsaw blade which it uses to great effect against its victims.

The Guardian constantly emits hysterical giggles which changes to a very deep, throaty insane cackle when it spots a potential victim.

Along with Obscura, the Guardian acts as one of Stefano's servants and is summoned by him at least twice to eliminate Sebastian. Despite its name suggesting it is a singular entity, Sebastian encounters at least 5 Guardians over the course of the game, and more than one can be encountered at a given time, being found throughout Union.

The Guardian is a manifestation of Stefano's insanity and his twisted obsession with art. Its horrific appearance represents the many women who were murdered to create his art pieces.

The Guardian first appears in the basement of the mansion, where it ambushes Sebastian from behind a mirror. Unable to fight back, he is forced to flee the monster but manages to temporarily evade it by hiding in a vent. As he attempts to escape down a long corridor, it smashes through the wall behind him and resumes it pursuit. Just as Sebastian approaches the exit, Stefano appears and throws a knife into his shoulder, crippling him with the intention of letting the Guardian finish him off. However, he is able to pull the knife out and slashes the monster's face, injuring it enough for him to escape into Union.

Upon Sebastian arriving at the Union City Hall, The Guardian suddenly forms out of the pile of corpses around the building's fountain, having been summoned by Stefano's Aperture. The beast can either be slain or avoided, which will award the player with one achievement each.

Multiple Guardians can be encountered in the Business District. Two Guardians initially patrol the streets whilst two more will spawn if Sebastian investigates the Residual Memories in the area. One of these memories involves a MOBIUS soldier attempting to incinerate a pile of corpses in the street, only for said corpses to merge into a Guardian that brutally kills him. Said Guardian will then jump down from a nearby roof to ambush Sebastian. The other Guardian will attack if Sebastian investigates the Residual Memory near the APC. 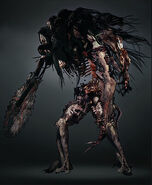 Concept of Guardian, albeit with a clawed left hand 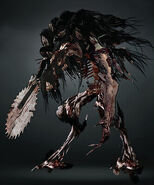 Guardian, but with digitigrade leg joints and a distended neck 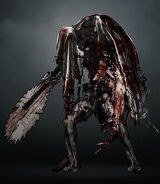 Guardian draped in a white sheet 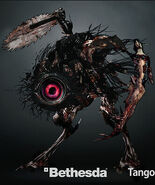 An early iteration of Guardian conjoined with a small Aperture

Close up of Guardian in her human form 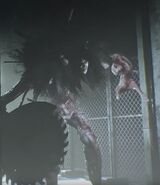