Masahiro Izumi
Gluttons are a rare variant of The Lost encountered in The Evil Within 2, being grotesque servants of Theodore Wallace.

Gluttons were citizens of Union whose hearts were afflicted with greed and immense lust for overindulgence, later falling victim to Theodore Wallace's mind tricks, and becoming revolting and bloated creatures with strange limbs melded into them.

Their only discernible form of attack is to run at opponents and erupt with idolatry in a blinding explosion.

In appearance, the Gluttons have a salmon-orangish skin tone, overflowing with bubbling gumma-like sores and tumorous masses, rippling with veins and pores. A vestigial Lost head can be seen growing from the sides of them, while their main heads are now sagging and fleshy, their teeth gritted. Only one massive original arm remains, while various smaller arms and legs are seen protruding out from other points of it's body. Gluttons will hobble after their prey on two short, stumpy legs, and when idle will periodically make a characteristic gurgling noise. If a Glutton explodes, it will discharge chunks of muscle and long, tube-like intestines, which will coil around any nearby objects.

Although first appearing in Chapter 10 in various places throughout Union, Gluttons are officially encountered for the first time during Chapter 12 as Sebastian Castellanos is making his way through the bowels of Theodore Wallace's fortress. Their presence in the game is a brief one, however, as they seemingly cease to be along with other enemy types associated with Theodore after his death at the end of Chapter 14.

Due to their propensity for blowing themselves up, Gluttons are best engaged at range, or stealthily executed via Sneak kills. If a Glutton detects Sebastian, it will begin hobbling after him in an attempt to blow him up, swelling as it becomes more and more agitated. Alerted Gluttons are very difficult to lose after they've spotted Sebastian, and it is advised to gain as much distance as possible between them, or to find a nearby safe house. They can endure several blasts from a decently-upgraded Shotgun, which is still an efficient weapon to use against them in a pinch.

Gluttons damage other enemies when they explode, which the player can use to their advantage. Walking up to a Glutton then sprinting away is enough to escape the explosion, assuming nothing blocks Sebastian's progress. This tactic is useful for conserving ammo for Gluttons as well as any Lost or Disciples that happen to be nearby. Killing an unaware Glutton with a headshot or a Sneak kill will not cause it to explode. 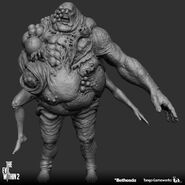