The Effigy, like all creatures summoned by Myra Hanson, is comprised primarily of psychoplasm, a viscous, white substance. Its body form is quite similar to that of the Amalgam Alpha, carrying itself around on large arms, bearing six of them. Atop its body are two seemingly hollow fetus-like beings, the one on the left having its head fused into the body, while the one on the right has a vague, articulating torso. Both of its original arms are melded into its chest, forming a straightjacket. It can be presumed that each of them holds control over half of the others' arms. The creature's body structure is akin to a bridge, with the midsection bearing a pink, glowing growth that serves as its weak spot that can be shot for extra damage.

Perhaps the creature's most notable feature is the telephone pole driven through its body, with live wires dangling off of it that it can manipulate at will to harness its electrical power against its foes.

The Effigy appears in Chapter 15, summoned by Myra Hanson in an effort to impede the progress of her husband, Sebastian Castellanos. Wielding an electrical pole and using its enormous body mass as weapons, the Effigy battles Sebastian inside a closed arena, and even though it proves to be a formidable combatant, it is eventually felled and the barrier blocking the way forward is dropped.

The Effigy has several attacks which it employs against Sebastian during their fight. Up close, it will either attack using its massive hands to crush Sebastian, or swinging the power pole into the ground and creating a short-lived AoE that deals electrical damage when stepped on. If Sebastian keeps his distance, the Effigy may jump towards him, which will deal considerable damage if it connects and knocking him down, exposing him to further attacks.

To win the fight, the glowing weakspot on the creature's midsection must be destroyed. While the Effigy itself does not bother to cover this up, its constant charging can make it hard to target.

Concept of Sebastian besides a Generator 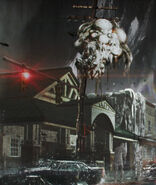 A Generator in a cut stage known as "The Abyss", boasting a working traffic light

Close-up of The Effigy's heads