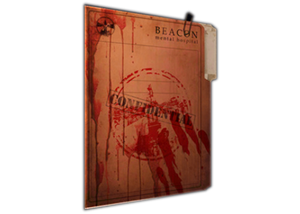 Documents are pieces of collectible notes, diary pages and research papers that can be collected throughout The Evil Within. These are often used to deliver exposition about the game's underlying plot, or occasionally as guides for puzzles.

Collecting these is part of the Every Nook and Cranny Achievement/Trophy.

Location: Found in Chapter 1: An Emergency Call on the corpse sitting on a wheelchair in the sewers. Unmissable.

13:30 - Anomaly occurs. Not with the subject: the stenographer claimed they weren't feeling well and then fell into a coma for reasons unknown. Doctor orders the STEM system terminated.

13:45 - Staff begin complaining of nausea and falling unconscious one after another. Those who can still move plan their escape from the hospital but for unknown reasons are unable to. Though the STEM system should have been deactivated, subjects maintained brain wave synchronization with the host.

Location: Found in the boiler room during Chapter 1: An Emergency Call. As soon as the player reaches the top of the ladder, make a right into the alcove and check the work desk there to find this note.

When did they put a lighthouse on the lake? Has it always been there? That circling light passes over me, passes through me... I feel like it takes something away each time. I can't remember what it was, though.

Location: Found in Chapter 2: Remnants, next to the bonfire where the cutscene of a villager turning into a Haunted occurs.

They got Norman. His cries for help just cut off. I can hear screaming every night. If I don't stay hidden I know I'll be next.

Location: Found in Chapter 4: The Patient. From the starting point of the chapter, move up the fork in the road and enter the house on the right. There will be a gap on the far right wall that leads to an abandoned bedroom, where this document can be collected off of the bed in the back.

HE LIES! And to his own son, his own flesh and blood. It's outrageous! Gone to a better place? That hypocrite. That sanctimonious fool! I know the truth. I know him better than he knows himself. He's trying to punish me again. He always resented our closeness. Thinks he can use it against me. Does he take me for a fool? Laura is NOT DEAD!

Location: Found in Chapter 5: Inner Recesses. In the area where the player as Sebastian must peek through holes in the wall to figure out the correct button to press, the document will be on a desk in the back corner of the middle room.

Walt, I've gone to get Donna back. I saw how to get into the wolf's den and I'm getting her back. I won't let her be a sacrifice. Don't follow. Just say and watch the family. I'll bring her back.

Location: Found in Chapter 6: Losing Grip on Ourselves. After the miniboss fight against Neun and Zehn, meet up with Joseph Oda and check the ground in front of the horse statue that he is inspecting.

It has been god's will that these two twin orphans survived. They were baptized and given medicine. Neun and his brother Zehn quickly recovered, but just as quickly did their aberration progress...

Of course they are twins, but for some reason their growth patterns exhibit identical values.

Location: Found in Chapter 6: Losing Grip on Ourselves. After reaching the lab underneath the church, check the workdesk next to the exit to find this document.

The church guard dog has begun to change. Just like the twins, the aberration is progressing.

It devoured six bodies today and already it howls for more. It has began to stress it's bars and chains in its fervor. I don't dare take my eyes away from that animal. It may think I am another offering...

Location: Found in Chapter 6: Losing Grip on Ourselves. Immediately after collecting the previous note, the player will enter a dark tunnel with a cage containing a sleeping Sentinel. Check one of the bodies near the fork of the tunnel to find this note.

Location: Found in Chapter 7: The Keeper. Immediately after obtaining the first Lithograph, the stone wall will open up to reveal what looks to be abandoned living quarters. Check the table to the right to find this note.

I went in too deep and of course it was a trap. Sophia told me to stop so many times. But it was only a little further to the truth. I knew there'd be challenges, but I was so close!

I noticed the faintest breeze coming from the crack of this door. This door has to lead to outside. This plate I found looks like it fits in the slot. It's probably the key, but which way does it go? Fifty-fifty odds. And I've been here pacing for what feels like an eternity, unable to make this simple choice.

Sophia, if I make it out of here, I'll hold you in my arms. I'll tell you that you were right and I'll never let you go.

Location: Found in Chapter 8: A Planted Seed Will Grow. After exiting the caverns area, the player will come across a locked door with the corpse of a woman impaled on wall spikes nearby. The note can be found on the ground next to the key plate.

Location: Found in Chapter 8: A Planted Seed Will Grow. At the end of the chapter, the player will find themselves in a circular operating room where a cutscene involving Dr. Marcelo Jimenez will play. After the cutscene ends, turn around and check the equipment next to the wall to find this note.

I've finally come to recognize the way, the portal to a new world. The details are all there, have been right in front of my nose. I'm appalled and incensed that I did not see them sooner. The specific process to break down a human's psyche, to obliterate it and give myself free rein, is so obvious. And now that I see it, now that what I have to do is in front of me, I feel as if there is nothing else I can do. I can have everything I sought, everything I've lost. But I need resources. Jimenez. That cretin will finally begin to earn his keep.

Location: Found in Chapter 9: The Cruelest Intentions. After arriving at the Victoriano Estate, walk past the two staircases leading up and turn left to find the doors leading to the dining room. The document is on the dining table in plain sight.

I saw her there again, standing at the end of the hallway. Long black hair, beautiful as ever, streaked with moonlight, eyes dark pools in her porcelain face. She wore her favorite red dress, like a crimson sunset. Like a streak of blood in the waning light. Laura, of course you couldn't be dead.

Location: Found in Chapter 9: The Cruelest Intentions on the second floor of the Victoriano Estate. After entering the library, make a right and enter the first door on the left. The note will be on a desk in the back.

Above, faceless spectators
mocking the tragedy

Below, helpless victims
losing everything

Location: Found in Chapter 9: The Cruelest Intentions on the floor of the first level's music room. The note will be lying against the wall underneath the safe painting that must be interacted with to progress. Unmissable.

My children have been taken from me. Was it fate? Was it something he did? Surely not my perfect son. It was that fire. It ruined everything, took everything. The children are not the same. And neither is Ernesto. He said he was taking care of them. That they were safe. But now he says they're gone! How could that be? A mother would know such a thing. I still hear my darling boy's voice. His laughter. And always from the basement. It cannot be. A mother needs her children!

Location: Found in Chapter 10: The Craftsman's Tools on the floor just outside of the first save room.

Do you still dream of escape? So near at hand? What is the point of dreaming when your body lies here, never moving?

Location: Found in Chapter 15: An Evil Within. As the player revisits the basement of Beacon Mental Hospital, check the corpse on the wheelchair in the basement where one first found the Old Note From Sewer.