"You will crawl before me. My disciples will break you..."
―Theodore Wallace intimidating Sebastian

The Disciples are monstrous servants of Theodore Wallace in The Evil Within 2.

Disciples are Theodore's own brand of The Lost, though instead of being driven by animalistic madness they are completely subservient to him. They appear as large, brutish creatures with charred, muscular flesh, the skin of their faces so heavily damaged that some have visible skulls. Lava seeps from fissures in their bodies, and they possess the ability to ignite themselves into large bursts of flame. They have very deep voices, often grunting and growling in battle.

Unlike other creatures encountered in Union, Disciples disintegrate into ash upon death.

Disciples are first encountered in Chapter 9, where a trio of them ambushed Sebastian Castellanos as he was approaching an illusion of his daughter. From that point on, they became a regular enemy throughout Union, often seen alongside a Harbinger.

Several Disciples appear later on along the path to Father Theodore's fortress, having been sent by the mad priest to hinder Sebastian and Yukiko Hoffman's progress, ultimately resulting in the death of the latter at the foot of the tower.

When not in combat, many Disciples can be seen kneeling down and praying in front of altars bearing the Mu symbol. In the absence of such altars, they will meticulously prowl about their environments.

During combat, the Disciples will charge towards Sebastian and attempt either a dashing punch or tackle. They will also try to grab him at close range and ignite themselves, badly burning him unless he can break free. Despite their hulking appearance, they can close in very quickly and will often work together to overwhelm Sebastian, taking it in turns to knock him down. If not killed with a headshot, a Disciple can grow a protective layer over its skull to reduce the damage from further attacks. Destroying their limbs will cause them to "bleed" lava, which they can immediately weaponize against Sebastian by swinging their stumps at him, splashing him with the substance and inflict minor damage. The Sawed-off Shotgun or Burst Handgun are recommended against these beasts, as they can be knocked back during their charge attacks. If all else fails, a Hand Axe can be used to instantly kill a Disciple without much trouble. In addition to that, Nitrogen Tanks strewn over some areas can instantly kill nearby Disciples when shot, and they are also very vulnerable against the Warden Crossbow's Freeze bolts. Throwing Bottles at a Disciple's head can open them up to a knife execution command, but the command can only be done if the Disciple is not on fire.

Similarly to The Lost, and many other creatures, Disciples can be Sneak Killed, Ambushed, and Predated. However, stealth attacks will only work when the creature is not ignited, attempting to ambush a Disciple on fire will result in Sebastian taking damage and instantly alerting it. 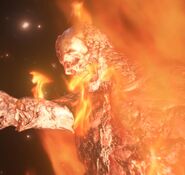