The Evil Within Wiki
Register
Don't have an account?
Sign In
Advertisement
in: Characters, Female characters, Deceased,
and 2 more

"I wouldn't be doing this for just anybody. Friends stick together, right?"
―Dana pretending to talk to Kate

Dana Robinson is the protagonist of The Evil Within (comic) series.

Though many details regarding Dana's early childhood aren't elaborated upon, she grew up in the verdant town of Pine Creek along the west coast with her parents, whom she maintained a healthy and loving relationship with, and stayed in touch with them to some degree after moving out at the peak of adolescence.

After graduating high school, Kate began attending college at a university, seemingly the Institute for Study Abroad Butler in London, however her topic of study is unspecified, though she is consistently seen carrying a textbook with the Vitruvian Man on the cover, hinting she may seek a degree in art and mathematics.

During her time at the university she developed an intense and passionate friendship with fellow student Kate Mellor, so much so that she began to fall in love with her. One fateful day, the two had scheduled to meet each other in front of campus, Dana seemingly having planned to confess herself more deeply to her. Dana spots Kate within the crowd, waving and calls out to her, a frisson of excitement welling up within her. She quickly decided to make her way over to her, becoming somewhat disoriented along the way, only to find that Kate was gone; vanished before her very eyes, or, as she began to postulate, "kidnapped", though nobody would believe her.

Over the course of the next six months, Dana struggled to deal with it so badly that she nearly suffered a breakdown, eventually caving and deciding to drop out of college and return home to her parents in Pine Creek with a stack of missing person posters for Kate.

Shortly thereafter, likely the diner, or somewhere along the way prior, Dana herself was abducted by Ruvik, him seeing her a particularly remarkable subject due to her capricious, obsessive, and somewhat paranoid state of mind, as well as her creative imagination, and her strength; both in terms of fitness and physical ability as well as willpower.

Though normally quite reserved amidst the myriad of other students at her university, Dana will quickly become rather animated and giddy as soon as Kate enters the vicinity. She is extremely doting towards Kate, to the point that she even says she would die to save her. After the mysterious disappearance of her beloved, she finds herself still pretending to talk to her as though she isn't gone at times, possibly as a calming mechanism or simply a form of self-referencial deprecating humor.

Dana is shown to be zealously devoted to those she cares for, from friends to parents, as shown by her refusal to give up on Kate, as well as the survivors she meets and grows to care for in STEM.

When by herself, a sassy and sarcastic side of Dana kept from most others, at least those whom she isn't close with, is seen.

When faced with all manner of horrors that STEM unleashes upon her, she isn't so quick as to let herself be overcome by fear, and displays an acute sense of adroitness, as well as a keen eye in the best of situations. Unarmed throughout the entire series, she must rely on her wits and agility alone to overcome the opponents she will face.

Dana also displays a great deal of empathy for others, and shows them great compassion in their times of despair, even when desperately on the move.

Dana is a young woman with dark olive skin, possibly suggesting partial African-American or Indian background. She sports chestnut-brown hair and always wears a green lightweight jacket, which she usually keeps unzipped when in a laidback environment, but is quick to zip up when things get dangerous. Beneath it she wears a yellow turtleneck, though when she's around Kate she specifically wears a much more revealing low-cut white shirt, or a fancy white denim jacket. Dana also wears a set of small golden earrings, as well as a pair of tight-fitting jeans, in addition to a duplet of white oxford-style sneakers. 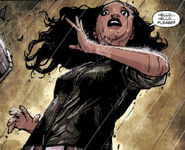 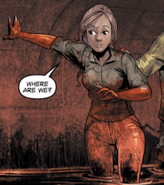 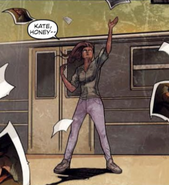 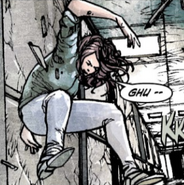 Dana and Kate
Community content is available under CC-BY-SA unless otherwise noted.
Advertisement