Chapter 15: An Evil Within

Chapter 15: An Evil Within
The Amalgam is the final boss in The Evil Within. It is created through the merging of Ruvik and a "perfected" iteration of the Amalgam Alpha.

A creature that combines the anger and animosity of the victims of Ruvik's research with his own madness. It grows larger as it absorbs the fear and hatred around it.

Ruvik is buried deep within the creature's body, and he's only vulnerable when it opens its head, exposing the core.

The Amalgam is the ultimate "evolution" of Ruvik's mental existence, comprising of a massive main body from which multiple limbs and tentacles project. The beast's head is equally-malformed, bearing uncanny resemblance to that of a Shigyo, and sporting a giant glass dome through which its brains could be seen, and is where Ruvik "sits" to pilot the creature.

Based on its name and the Model Viewer description, the Amalgam could very well be the result of Ruvik assimilating every last creature under his command in an attempt to destroy Sebastian Castellanos. As such, it is incredibly massive in size, towering over much of the surrounding skyscrapers and is nigh-indestructible, capable of taking successive Rocket Launcher hits to the body without flinching, and concentrated high-caliber machinegun fire could do little than momentarily inconveniencing it, though the transparent brain case is vulnerable to explosives.

The Amalgam is the final boss of The Evil Within, being encountered at the very end of the main plot after Ruvik presumably assimilates the consciousness of Leslie Withers. Immediately after failing to stop Ruvik, the entire building starts shaking violently as if hit by an earthquake, before toppling over and throwing Sebastian out the window. As he falls, Sebastian witnesses the scenery around him crumble before landing on a massive brain, onto which the Amalgam lands and immediately starts attacking him.

As the massive creature approaches, Sebastian sees no chance at directly fighting it and flees through a nearby ruined building, but a claw swipe of the Amalgam hits him out of it and onto the bed of a nearby Humvee. Spotting Ruvik in the creature's head dome, Sebastian mounts the Humvee's machinegun in an attempt to ward it off, but the shots only serve to annoy the beast, who then tosses both the truck and the detective towards a nearby ruin, which impales him on a metal spike. Badly wounded and bleeding profusely, Sebastian sees Ruvik commanding the behemoth towards him. Unwilling to give up and die, he spots the corpse of the Sadist hanging nearby with a Rocket Launcher, which he quickly commandeers to fend off the Amalgam. Upon hitting and shattering its head dome, Sebastian manages to gravely wound the beast, prompting it to tear him off the spike and throws him onto the ground in an attempt to devour him whole. Fortunately for Sebastian, Ruvik also happens to be relocating into its mouth, presenting him with a chance to take down the villain for good. He takes the shot as the monster's massive mouth engulfs him, though Ruvik seemingly dies before he does, taking his mount down with him.

Despite being a major boss in the game, the player never directly fights the Amalgam while on foot. The boss fight begins with the Amalgam tossing Sebastian onto an upward ramp, where it will periodically sweep down towards Sebastian with its claws, which must be dodged at all costs or it's an instant death. The ramp then leads into a ruined office building, which the Amalgam will now try to break apart with its tentacles. Failing to dodge either the tentacles or the claw sweep will result in an instant kill.

As Sebastian makes his way out of the building, the creature will smack him onto the bed of a Humvee with a mounted machine gun. The player must use this machine gun to shoot at the glass dome on the Amalgam's head, while defending themselves from the creature's tentacles. Failing to drive off any of the tentacles will result in an instant game over.

Once the dome shatters, the Amalgam will toss Sebastian onto a spike, where he must use a Rocket Launcher with 15 shots to wound the creature. One to two body shots will stagger the beast and leave its head vulnerable to a rocket. Repeat this three times to advance to the next stage.

On its last legs, the Amalgam will attempt to devour Sebastian whole. Time will slow down as the beast swoops in to bite Sebastian, leaving Ruvik open to a headshot which will end the fight. The player will only have one shot, and failing to shoot Ruvik in the head will result in a game over. 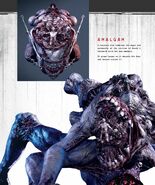 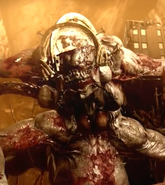