"As self-consciousness waned, a sort of stasis was achieved. Like two creatures sewn together, and forced to live as one, eternally hating the other. Delicious. "
―Ruvik, describing the birth of the AlterEgo

The AlterEgo are enemies that appear in The Evil Within.

The AlterEgo is the result of connecting individuals with dissociative identity disorder to STEM, whose alternate states (commonly abbreviated as 'alters') were both radically mutated to give rise to a more monstrous form of creature. Outwardly, these subjects appears to be more beastly compared to the lesser Haunted, and visually seems to have been meshed together from a normal human body and a ragged, animalistic creature. The host body's prior clothing are not much more than a pair of ripped pants and a torn shirt, and that is if they happen to be wearing any. As a side effect of their advanced mutation, AlterEgos are somewhat less intelligent than their Haunted cousins, but are also more vicious and unpredictable.

Both "halves" of the creature are essentially separate beings that are forced to exist alongside one another in one body to eternally despise each other, an unending internal conflict that their creator finds amusing.

Owing to the state of their mutation, AlterEgos are markedly more wild and vicious than the rank-and-file Haunted. Rather than conducting routine patrols, these creatures constantly shamble about their immediate vicinity searching for prey, and it is impossible to sneak up on one for a Stealth Kill.

In combat, AlterEgos are more hardy than the Haunted, allowing them to withstand much more punishment while swiping at Sebastian Castellanos with their sharp talons or biting at his neck in a grabbing hold. If an AlterEgo cannot reach the player, it will resort to spitting globules of acid at them, which can be deadly when engaging more than one of the creature. Their most effective means of attacking Sebastian, however, is an insectoid tentacle that they store in their chest cavity, which can shoot out at nearby prey to rip their head off for an instant kill. 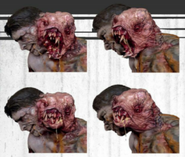