Chapter 15: The End of This World

Chapter 15: The End of This World
Albedo are enemies encountered in the The Evil Within 2 throughout Limbo.

The final variety of Lost encountered, Albedo are created by Myra Hanson to prevent Sebastian Castellanos from reaching Lily. They are found only in Limbo, and are some of the only creatures that can exist in such a hopeless environment.

Similarly to the Lost, Albedo are born from the former denizens of Union. They have been overtaken by a gooey white substance known as "psychoplasm", which they are comprised of. In contrast to the slimy and viscous nature of The Watcher, the psychoplasm that they are made of is hardened and cracking, similarly to the Effigy.

Many Albedo have additional hands growing outward from various facets of their body, though they are stiff and serve no practical use to them. The exteriors of their nearly stone-like bodies are heavily eroded, with many fissures and uneven chip coatings all throughout, and faintly visible grooves in the shape of formerly exposed muscle tissue. Some Albedo have bubbling psychoplasm splotches on their chests, eye sockets or backsides.

When idle or distressed, Albedo will let out a frantic croaking noise, alterting others nearby as they pursue their victims.

For reasons unknown, Albedo are also exclusively male, it would seem.

While many Albedo can already be seen patrolling the areas they are found in, pacing about and gazing at their surroundings, others can be observed to enter a catatonic and statue-like state when unoccupied, similarly to many inanimate Albedo, though whether they emerge from this state only at Myra's command or at their own volition is unknown. Breaking free from this state takes a few moments, as they must shift poses until full animation is reachieved.

In combat, Albedo attack in a similar manner to the Lost, though with much greater ferocity, swiping repeatedly when next to Sebastian, and often lunging at him after engaging in a sprint, going for the throat. Albedo will also get back up after being knocked over much more quickly that their cousins, almost instantly on higher difficulties, making a stomp-kill quite difficult to pull off when there is too much ground between Sebastian and the creature. When damaged, fragments of the Albedo will shatter off, and upon death they will fall over and violently burst into pieces.

Albedo are not particularly susceptible to flames, and will often survive being ignited, shrugging off the damage after the flames die down. Albedo also tend to quickly shrug off blasts from shotguns, though rapid assault rifle barrages can stagger them effectively, and a fully-upgraded handgun can easily penetrate their durable exteriors and lead to an insta-kill headshot.

Stealth kills are also an efficient technique to dispatch them one-by-one as they wander away from their groups. 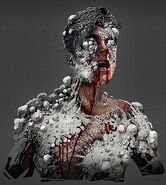 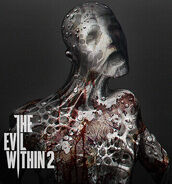 In this concept, the Albedo almost appears to be suffocated by a layer of psychoplasm 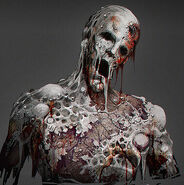 A slimy and drippy design for the Albedo 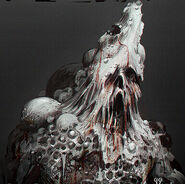 Concept of Albedo in Limbo (note the female one), an area where their presence was ultimately scrapped

A horde of Albedo rush Sebastian in a metropolitan area 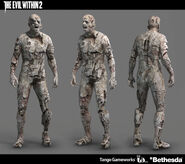 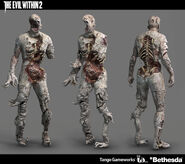 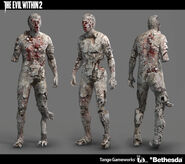 An Albedo writhing to life
Community content is available under CC-BY-SA unless otherwise noted.
Advertisement